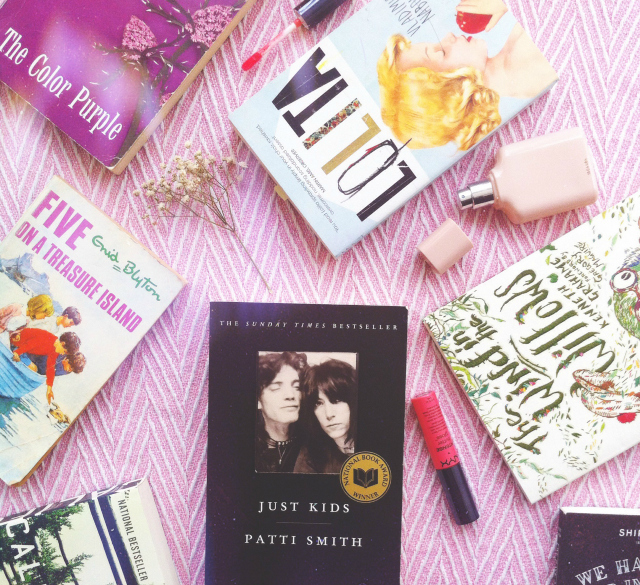 A little over a year ago, my stupidly handsome friend, Jason, created the Britney Spears Book Tag. A tag that combines my love of literature and the so-called Princess of Pop? Count me in! As ever, this post is spoiler-free so there's no need to worry about me ruining anything for you.

In order to get us all in the mood, I've compiled a little Britney playlist to see us through. Don't ever say I don't treat you. 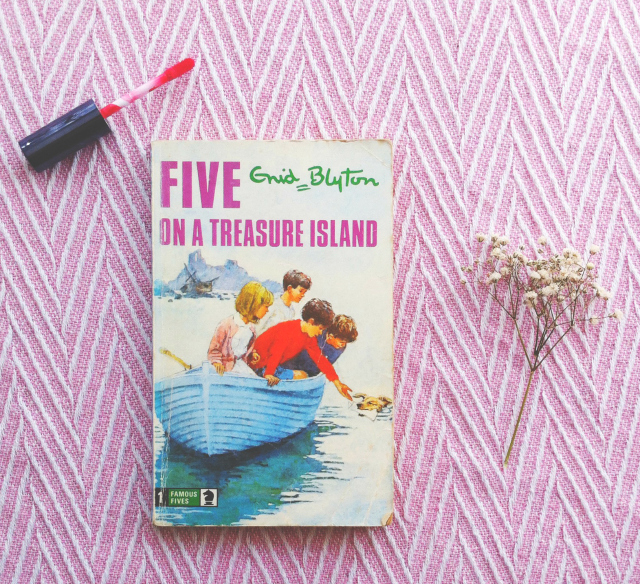 I mentioned it back in my Desert Island Reads post but as a child I absolutely loved Enid Blyton's Famous Five series. I read my Mum's original set from the 1970's which I think makes it all the more special to me as I'm a bit of a sentimental creature. I would sit for hours reading book after book, day after day, lapping up their adventures. There was a period of my life where I wanted nothing more than to venture out with a bountiful picnic, with lashings of ginger beer, before taking down a gang of smugglers. I'll always be fond of these books. Who knows whether I would be the same book-reading Bee without them? 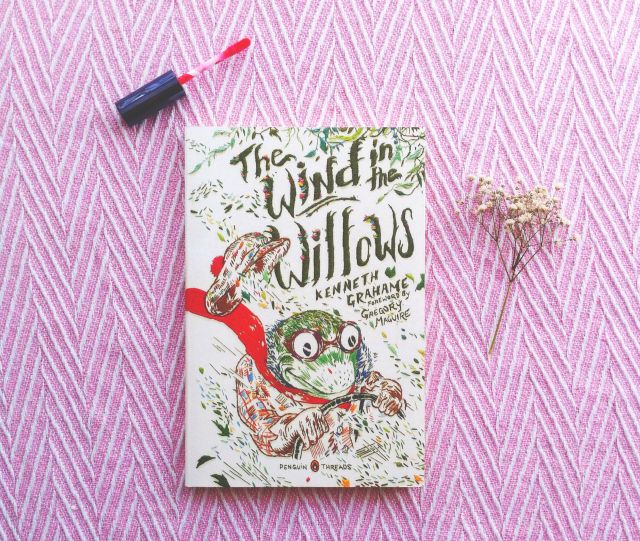 oops, i read it again!
a book that you love to re-read

I think the book I've re-read the most in my life is The Wind in the Willows by Kenneth Grahame. I have waxed lyrical about this book on many occasions but my god I just adore it - from the characters, to its commentary on Edwardian trepidation, to its ethereal imagery. I'm probably due another re-read. 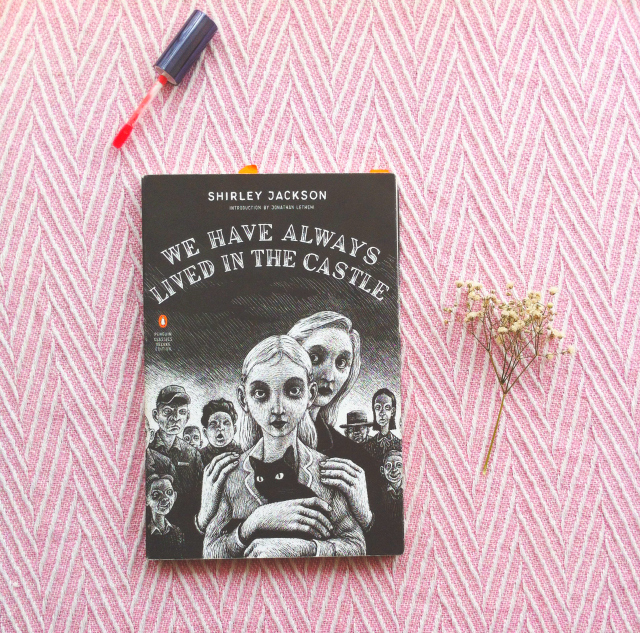 As I couldn't find books that resembled one another in my collection, I've decided to bend Jason's tag a little and share a book featuring siblings instead. In this case, I have gone for We Have Always Lived in the Castle by Shirley Jackson. This book has one of my favourite opening pages, alongside Rebecca, for the way in which it introduces its protagonist, Merricat, and her situation. Being a sister is something that I consider to be an important part of my identity and the fierce loyalty between Constance and Merricat was something that I really related and responded to. Give this a read if you haven't already. 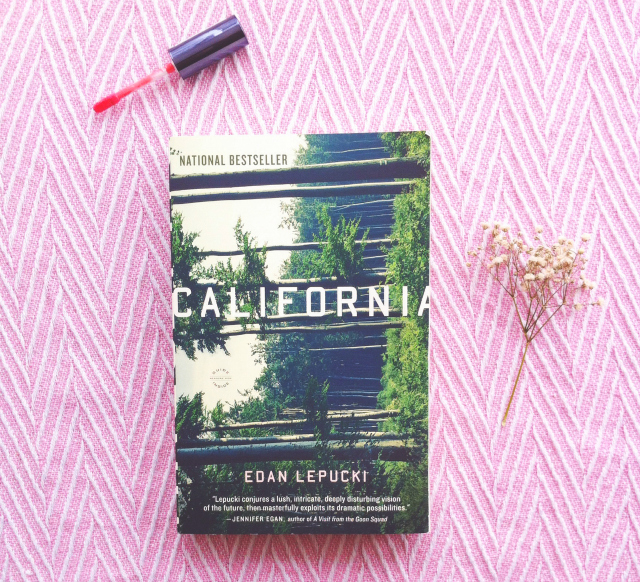 I tend to read quite a bit of post-apocalyptic fiction so books from that genre can sometime get lost in the ether that is my mind. However, California by Edan Lepucki has been in the back of my mind ever since I read it and yet I have never heard anyone else in the blogosophere or booktube community discuss it. I definitely need to dip back into Cal and Frida's world once more if only to experience that haunting ending again. 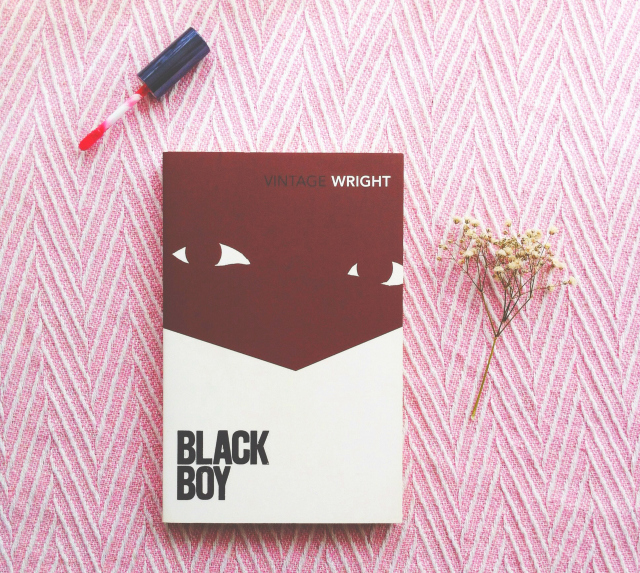 JUSTIN TIMBERLAKE
A BOOK YOU CAN'T GET OVER

Black Boy by Richard Wright was a book that I purchased for university, never read, and left sat on my shelves for years. However, last year I felt compelled to give it a go. It transpired to be one of my best bookish decisions. There was a passage from chapter three of this book, photographed above, that made me cry and cry upon reading it. It felt life affirming. It felt as if I were reading my own thoughts aloud. It felt biblical, almost. I have not stopped thinking about it and so for that reason it is a book that I can not and will not get over. 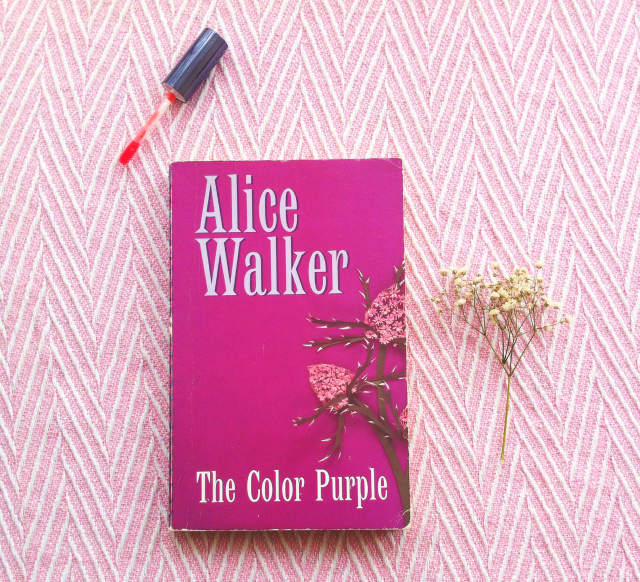 
I'm going with Shug Avery from The Color Purple.  When I first met Shug I felt intimidated by her because she is supposedly this beautiful jazz singer. Spoiler-free so I won't discuss specifics but Shug essentially brings hope, sisterhood and love to our protagonist even though she is not required to do so. It would have been easier for her to react with cynicism and hate but she doesn't. In that respect I believe she made me look at my own behaviours and assess myself. I would totally make out with her for that reason. 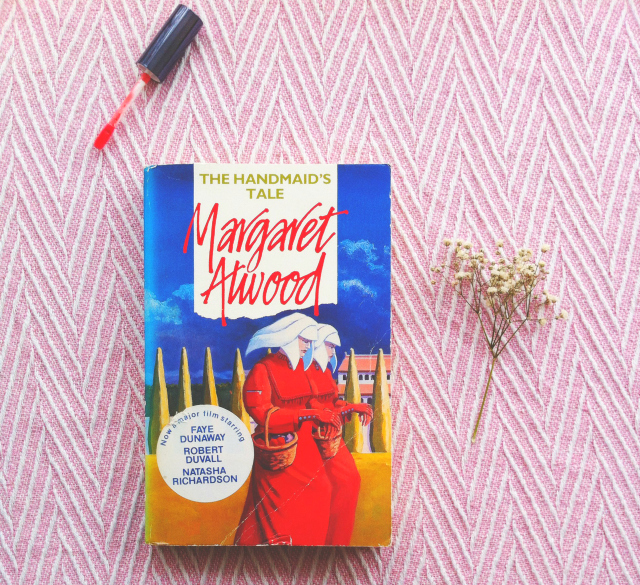 the onyx hotel
A BOOK YOU quit halfway through

I, weirdly, still haven't finished Handmaid's Tale by Margaret Atwood. I didn't intentionally put it on the backburner. It just, sort of, happened. I'm definitely going to back it up again soon though after it was announced a few weeks ago that Samira Wiley is to star in a TV adaptation of it. 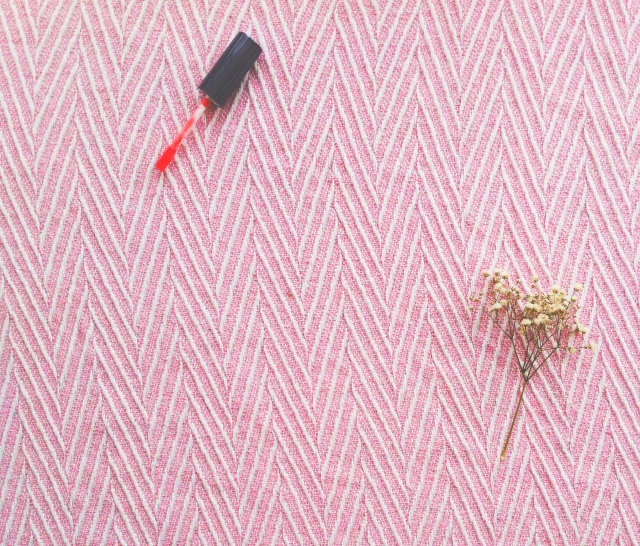 federline
the book you most regret bringing into your life

The Old Man and the Sea by Ernest Hemingway. The most dull whiney book I have ever read in my entire life. As I said in my review, the ennui was probably the point but my god it was insufferable. If you enjoy hanging out with the boring old manchild that sits by the plates of sausage rolls at parties, you'll love this. If not, head for Hemingway's short stories and give this a wide berth. As you can see, just as Britney ditched K-Fed, I ditched The Old Man and The Sea. 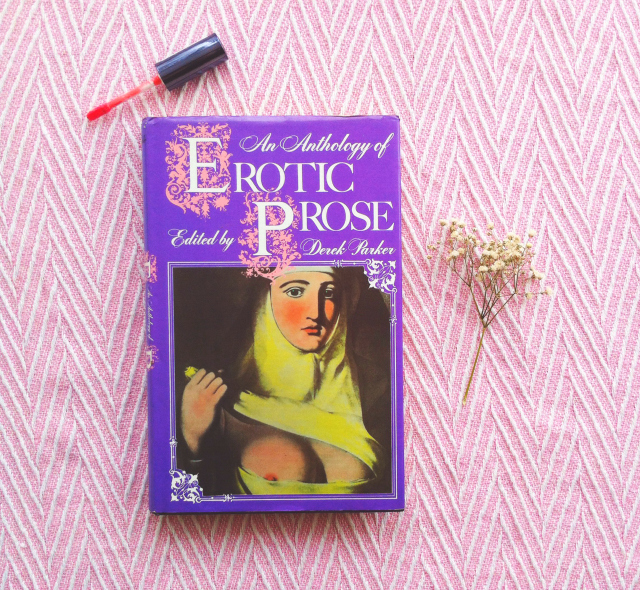 barefoot in the bathroom
a dirty book

'I, struggling faintly, could not help feeling what I could not grasp, a column of the whitest ivory, beautifully streak'd with blue veins, and carrying, fully uncapt, a head of the liveliest vermillion: no horn could be harder or stiffer; yet no velvet more smooth or delicious to the touch'

As we all know, pals, there is nothing more arousing to a woman than a vermillion bellend. Phwoar! I am fired up. 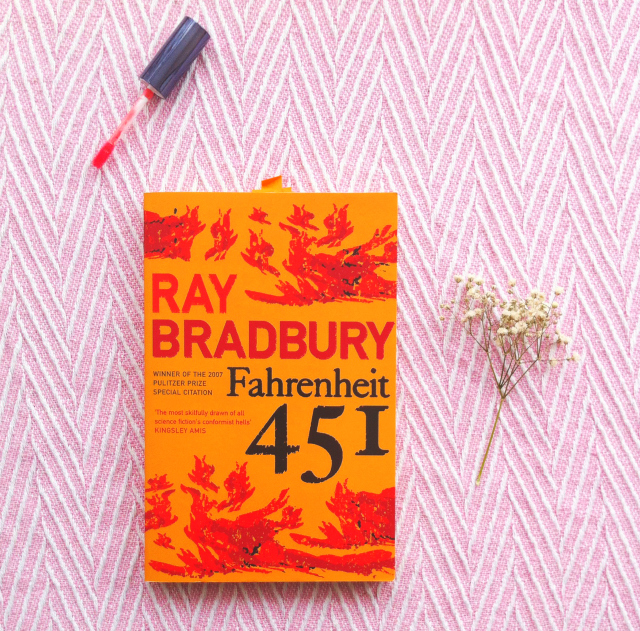 the cheeto
a book with an orange cover

Fahrenheit 451 by Ray Bradbury. I read this a couple of years ago and really enjoyed it - despite feeling as if the latter half was a little weak and jumbled. It's a read that is heralded as the perfect dystopia for bibliophiles and I think that's pretty accurate. 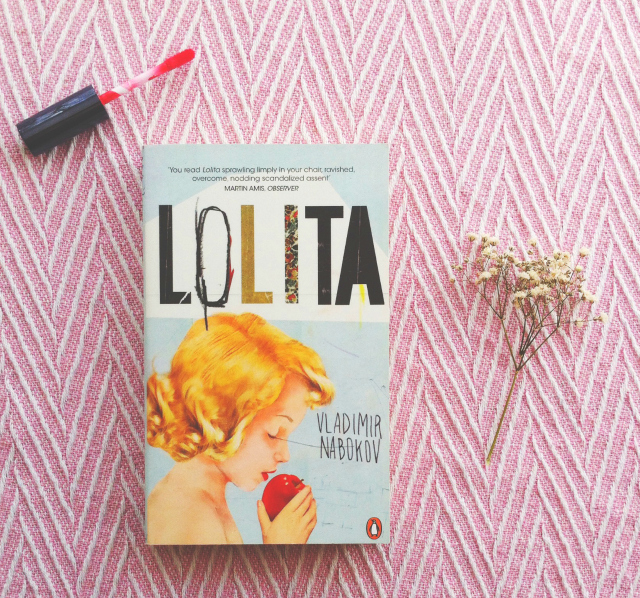 2007
a book that was tough to get through

Lolita by Vladimir Nabokov is one of those books that either gets rated really high or really low, depending on how difficult people find the subject matter and how they deal with Humbert's character. I, personally, rated the book 5 stars. However, that does not mean that I didn't find it incredibly hard to stomach. It was tough to get through and I would recommend everyone approach it with caution. 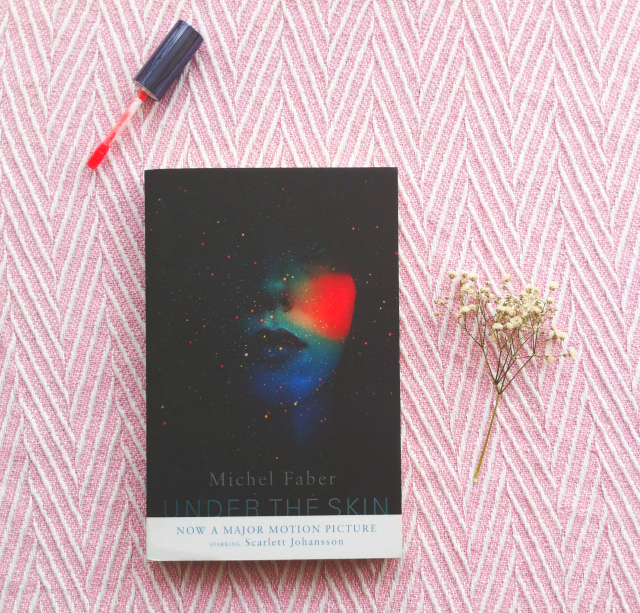 'gimme more'
a book that should have had a sequel/series

I was saying in my book reviews just last month that I could follow Under The Skin's Isserley into a hundred stories. I, obviously, don't want to delve into spoiler territory here so I won't explicitly express what I would like to see in a sequel but I would very much like to learn more about Isserley, her background and what it is like to be her. 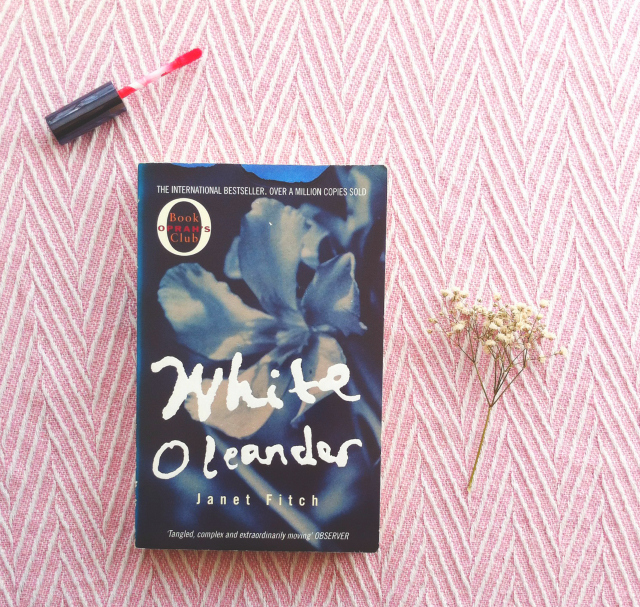 starbucks
a book that kept you up all night

White Oleander by Janet Fitch was one of those reads that I could not put down and, as a result, ended up reading late into the night. This is another book that I feel deserves even more recognition. Read it. 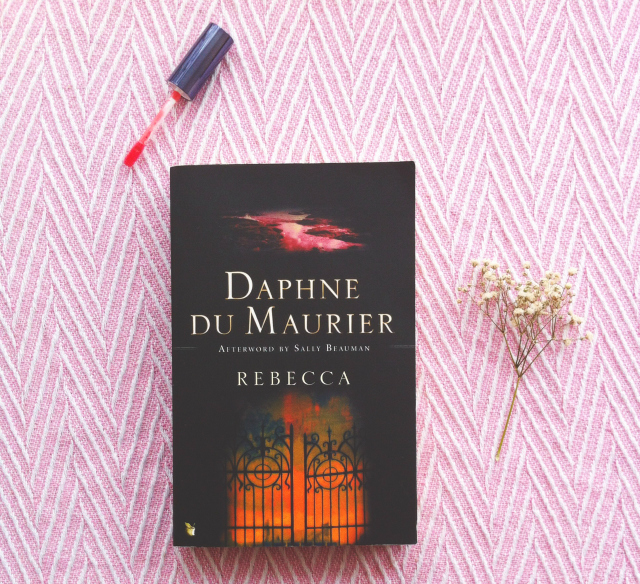 '3'
a book featuring a love triangle

Rebecca by Daphne Du Maurier popped into my head as soon as I read this prompt. Don't be the last person to have not read this book. Seriously. It is a great read! 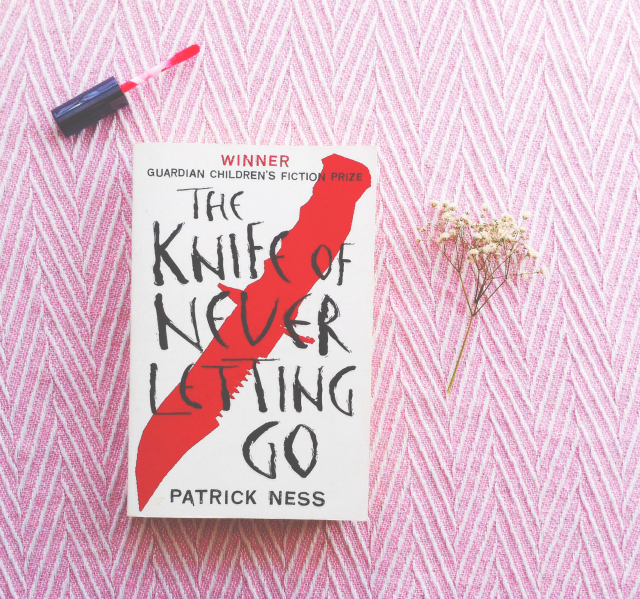 'cool'
a book you thought was really cool

I feel as if I am way passed being able to accurately determine what is 'cool' but I really enjoyed The Knife of Never Letting Go by Patrick Ness despite YA not being my usual bag. The pacing, characters, and plot is just so goooooood and so original. You should all meet Todd and Viola, if only because I have told you to do so. 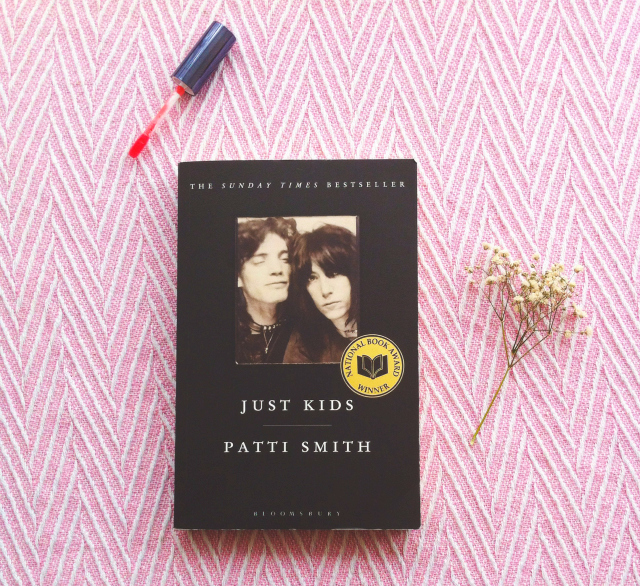 I'm like a stuck record but it's Just Kids by Patti Smith. I just...I just loved it so so much. It was beautiful to read and, for me, inspirational to read about another creative's experiences and lifestyle.


Aaaaaaand, there we have it. My take on the Britney Spears Book Tag. I hope you all enjoyed this Britney themed trip through my books. Please feel free to do the tag, crediting Jason, and let me know if you do it because I'd love to see your answers too!

▴
If you'd like to scroll through all of my book blog posts then you can. Or, alternatively, you could just flick through my book hauls instead. This post contains affiliate links. If you buy the books through the links I've provided, I will earn 5% commission.