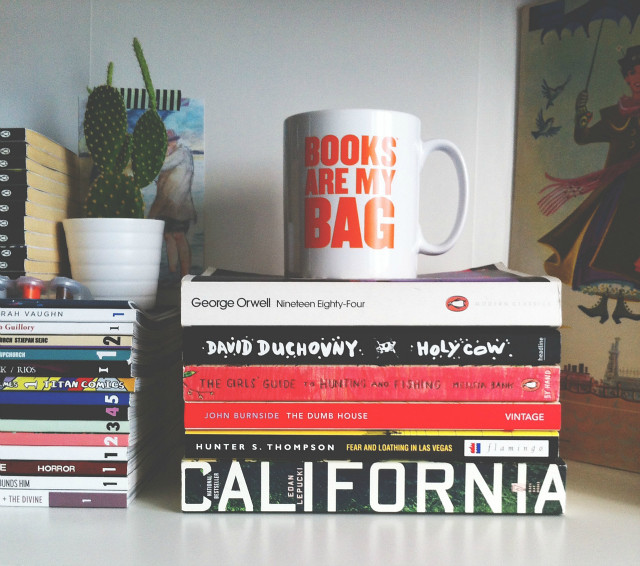 October was a busier reading month for me, compared to September's efforts at least, and I ended up getting round to a few books that really surprised me! I've actually upped my Goodreads challenge for the year to 52 books, to match last year's efforts, so please pray for me as I try and read a ton of books in the next month. God knows I'm going to need the support... 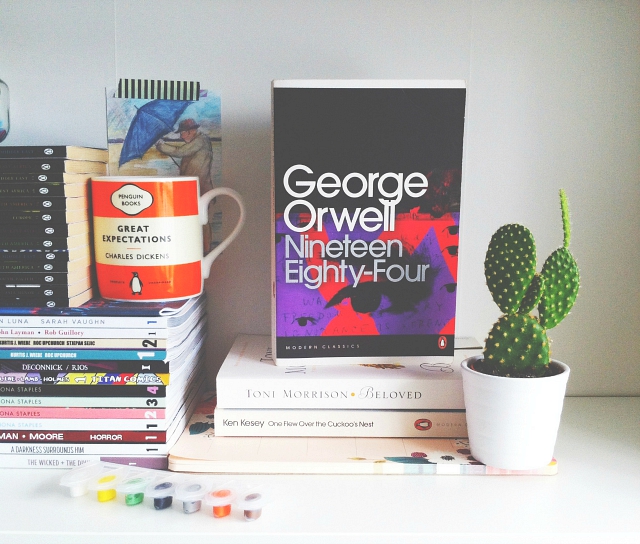 35. 1984 by george orwell
FINISHED: 02/10/15 | ISBN: 014118776x | PAGES: 355
Hidden away in the Record Department of the sprawling Ministry of Truth, Winston Smith skillfully rewrites the past to suit the needs of the Party. Yet he inwardly rebels against the totalitarian world he lives in, which demands absolute obedience and controls him through the all-seeing telescreens and the watchful eye of Big Brother, symbolic head of the Party. In his longing for truth and liberty, Smith begins a secret love affair with a fellow-worker Julia, but soon discovers the true piece of freedom is betrayal.

That's right, pals! After saying I was going to read it about a billion and one times, across a billion and one years, I finally settled down and read this dystopian classic. With tight fautless prose, Orwell creates an entire world rich in ideas within just a few hundred pages. I imagine it made for an absolutely astounding read when it was first published but, even still, I felt like it still held up to the contemporary reader. Overall, I found this to be an interesting read - albeit disturbing at times - a must for those interested in the dystopian genre. 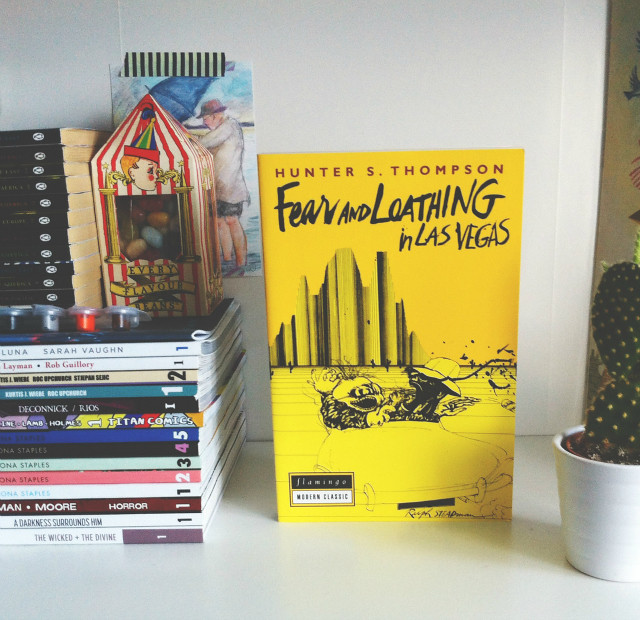 36. fear and loathing in las vegas by hunter s. thompson
FINISHED: 2/10/15 | ISBN: 0586081321 | PAGES: 224
Fear and Loathing in Las Vegas is the best chronicle of drug-soaked, addle-brained, rollicking good times ever committed to the printed page. It is also the tale of a long weekend road trip that has gone down in the annals of American pop culture as one of the strangest journeys ever undertaken.

Sometimes books jump out at you as you browse your shelves for your next read and this canary beauty was one of them. Guys, I absolutely loved this book and I didn't even expect to fall in love with it! This was a hilarious fast-paced farce jam packed with messed up characters that find themselves in the most surreal situations, doing and saying the most awful things, and the joke is always on them. The humour reminded me of Rick and Morty and It's Always Sunny in Philadelphia, two shows that I very much like, so if you too are fans of those shows you'll probably like this book. I'm definitely going to have to re-read this in the future. 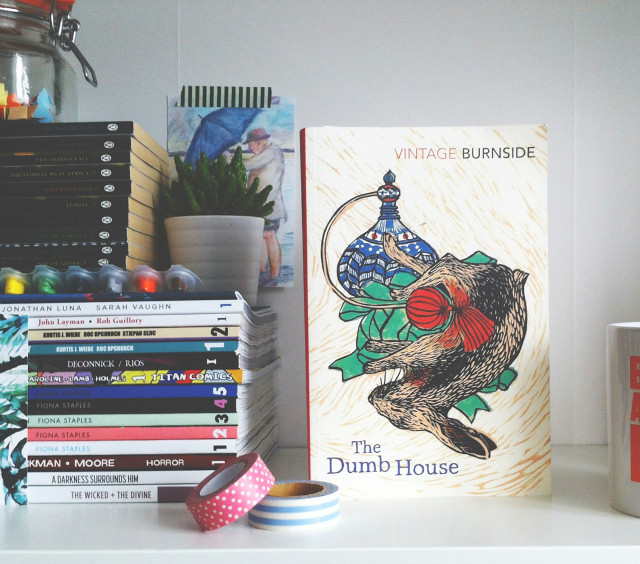 37. the dumb house by john burnside
FINISHED: 17/10/15 | ISBN: 1784870110 | PAGES: 204
In Persian myth, it is said that Akbar the Great once built a palace which he filled with newborn children, attended only by mutes, in order to learn whether language is innate or acquired. As the year passed and the children grew into their silent and difficult world, this palace became known as the Gang Mahal, or Dumb House. In his first novel, John Burnside explores the possibilities inherent in a modern-day repetition of Akbar's investigations. Following the death of his mother, the unnamed narrator creates a twisted variant of the Dumb House, finally using his own children as subjects in a bizarre experiment. When the children develop a musical language of their own, however, their gaoler is the one who is excluded, and he extracts an appalling revenge.

I bought this after the #Burnsided hype took over the online book community, as mentioned in my book haul, and if I'm honest said hype isn't something I will be buying into with this review. It was of the same disturbing ilk as some of my favourite books such as Perfume and Lolita but, whilst they relied on ridiculously clever writing to explore depravity, Burnside relied on hideously graphic imagery that felt gratuitous in comparison. This book wasn't without some merits, the tone, for instance, was sustained throughout, but if I'm honest it's not something I would pick up again. It actually really disturbed me and I'm not easily disturbed. 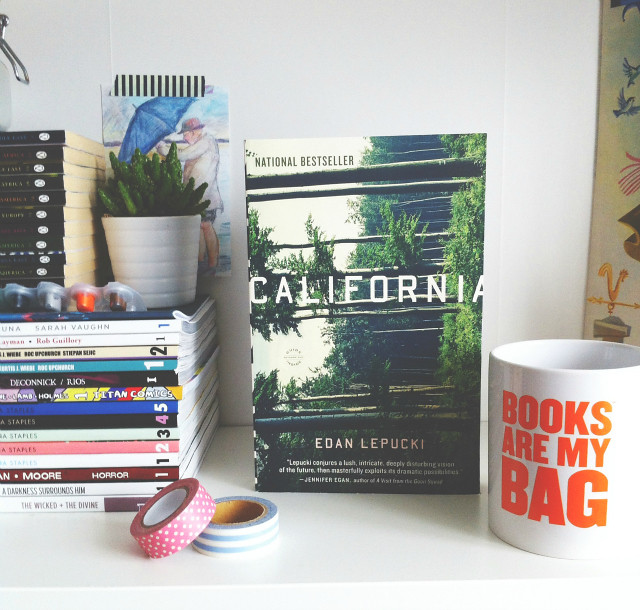 38. california by edan lepucki
FINISHED: 22/10/15 | ISBN: 031625083x | PAGES: 416
The world Cal and Frida have always known is gone, and they've left the crumbling city of Los Angeles far behind them. They now live in a shack in the wilderness, working side-by-side to make their days tolerable despite the isolation and hardships they face. Consumed by fear of the future and mourning for a past they can't reclaim, they seek comfort and solace in one another. But the tentative existence they've built for themselves is thrown into doubt [...] Cal and Frida set out for the nearest settlement, a guarded and paranoid community with dark secrets. These people can offer them security, but Cal and Frida soon realise this community poses its own dangers. In this unfamiliar world, where everything and everyone can be perceived as a threat, the couple must quickly decide whom to trust.

This book came out of nowhere for me and I absolutely loved it. I haven't stopped thinking about Cal and Frida since I read it and I think that's a testament to Lepucki's amazing characterisation. As you guys know, I'm a sucker for post-apocalyptic tales, particularly those set in the wildnerness and those that look at human nature in general, and this was just totally up my street. I found myself really struggling to put this book down and I haven't really felt that way about a book since I read the Chaos Walking trilogy. I didn't know where Lepucki was going to take the story and I was seriously impressed with how she weaved everything in. The ending left me with soooo much to think about and I kinda wish I could elaborate here but I would much rather I kept these mini reviews spoiler-free. I just really appreciate novels that encourage contemplation and discussion and this felt like one of them. I think on a second read I'd probably bump this up to a five star book, simply because it was my bag. Will it make the canon? No, but I don't think 5 star books need to - a 5 star review for me simply means I loved it. If this sounds like your bag, you will probably equally enjoy it. If you're a bit lukewarm towards it, it probably won't be for you.


I would definitely love to hear from Cal and Frida again so Edan if you're reading this... 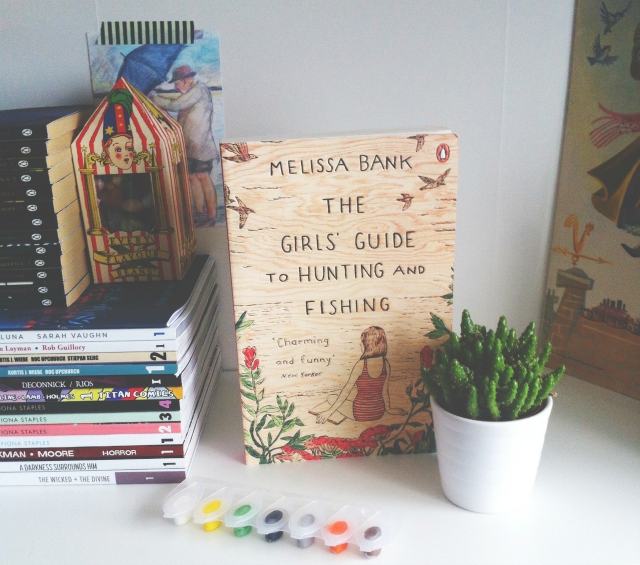 39. the girls' guide to hunting and fishing by melissa bank*
FINISHED: 30/10/15 | ISBN: 0241973600 | PAGES: 304
After following the advice from a manual called 'How to Meet and Marry Mr Right', Jane learns that in love there is neither pattern nor promise. The Girls' Guide To Hunting and Fishing is a deeply funnily collection of connected stories and a portrait of Jane, a woman maneuvering her way through love, sex and relationships.

I wanted to read something lighter following my run of dystopian reads so I opted for this beauty from the Penguin By Hand collection because I love me a bildungsroman. The Girls' Guide is told through a series of vignettes / short stories over the course of Jane's life, charting moments in her childhood to her later adult relationships. She was so easy to warm to as a protagonist and further confirmed that I love to read from a woman's perspective. I have to be honest with you, I didn't expect much from this because romance just isn't my bag. However, whilst my admiration did cool off where the romance was concerned, I really enjoyed parts of this  - particularly when Jane was interacting with her family. The last 'story', unfortunately, felt far removed from the rest, almost alien to me, and it took me out of the book completely. I was disappointed, I have to admit. I would, however, still recommend this to everyone, particularly if you enjoy stories that span decades of a character's life, because a lot of the things I didn't like are probably things that others would really enjoy. 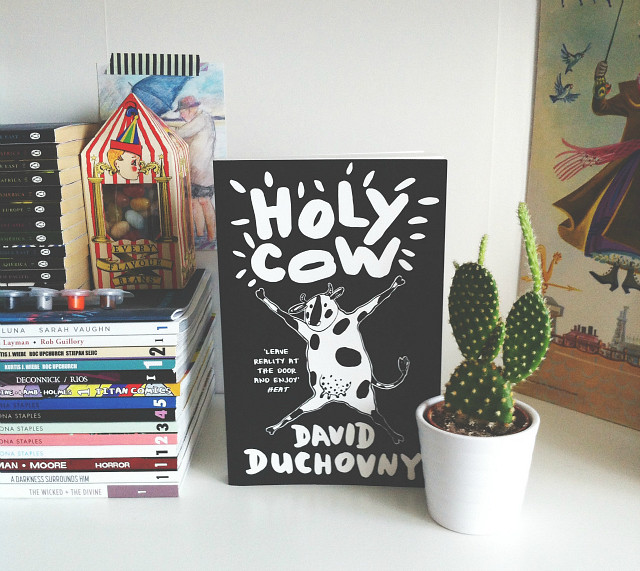 40. holy cow by david duchovny*
FINISHED: 30/10/15 | ISBN: 1472225910 | PAGES: 224
Elsie Bovary is a cow and a pretty happy one at that. Until one night, Elsie sneaks out of the pasture and finds herself drawn to the farmhouse. Through the window, she sees the farmer's family gathered around a bright Box God - and what the Box God reveals about something called an 'industrial meat farm' shakes Elsie's understanding of her world to its core. The only solution? To escape to a better, safer world. And so a motley crew is formed: Elsie; Shalom, a grumpy pig who's recently converted to Judaism; and Tom, a suave turkey who can't fly, but can work an iPhone with his beak. Toting stolen passports and slapdash human disguises, they head for the airport...

If you like David Duchovny, you're probably going to like this. It was fun, surreal and, at times, wonderfully silly. It's colloquial, sure, but it's quite fun to read in his voice anyway. One of the most endearing things about this book is the times in which Duchovny breaks down a wall as it were and has Elsie discuss her notes from the editor. At times, I found it could be quite preachy with regards to the consumption of meat but it didn't affect my overall enjoyment of the book. All in all, this was a fun way to while away an hour and I would recommend it to fans of Duchovny and / or talking animals.

Have you read any of these books - if so, did we have similar reading experiences? What did you read during October?

*This book was sent to me for review purposes by the publisher. All opinions are my own.
This post contains affiliate links.
Labels: 2015 books