Books I Would Take To A Desert Island 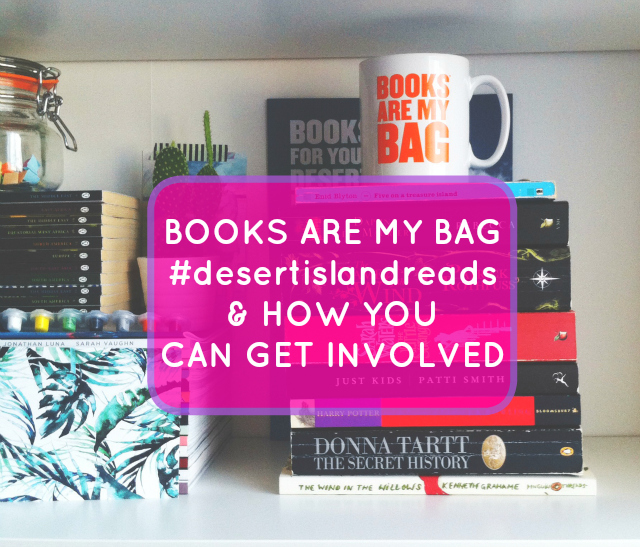 happy bamb 2015! Books Are My Bag is a nationwide campaign that celebrates bookshops. The campaigns are, essentially, a window of time where you're actively encouraged to go out and buy even more books in order to support your local bricks and mortar bookshop(s). The campaign runs from Thursday 8th October, also known as Super Thursday, to Saturday 10th October, a day where bookshops nationwide will be holding Big Bookshop Parties for all of their customers. If you'd like to get involved you can locate your local bookshops via the BAMB website before sharing your purchases online using the following hashtags  #booksaremybag #bamb and #lovebookslovebookshops. This will, hopefully, make everyone super jealous and encourage everyone else to head out and buy books of their own.

This year's theme is #desertislandreads and, consequently, BAMB have asked me to pick out 8 books that I would take with me to a desert island. 'Wow Bee, that must've been really fun to do!', I hear you say. False. It was really really horrible because it turns out it comes with many a dilemma. Do I take books that I have read and loved to remind me of home or do I take new reads that I've been meaning to get round to to inspire me?  There are pros and cons for both, naturally. If I take books I've already read, I know I love them. However, I won't ever get to experience new books and explore new worlds. If I take new books, I'll have the opportunity to have those new experiences but, of course, what if I don't like them?! After much deliberation, I have decided to pick a mixture -- 4 read and 4 unread. I'm going to take unread books too because I rarely re-read, love jumping into new stories and I can always set about re-writing the ones that I don't like as much! I'm not 100% about my choices but then again that's the story of my life so we'll just carry on... 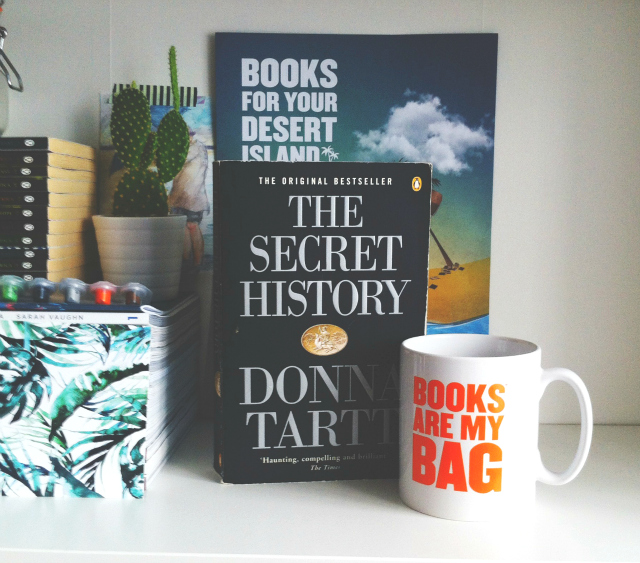 1| t h e s e c r e t h i s t o r y by donna tartt
Under the influence of their charismatic classics professor, a group of clever, eccentric misfits at an elite New England college discover a way of thinking and living that is a world away from the humdrum existence of their contemporaries. But when they go beyond the boundaries of normal morality their lives are changed profoundly and for ever.

This is basically everyone's favourite book so it has to be good right?! The fifty or so pages that I have read so far have proved to be really interesting so I have high hopes. Failing everything, there's quite a few pages here to keep my fire burning for a reasonable amount of time... 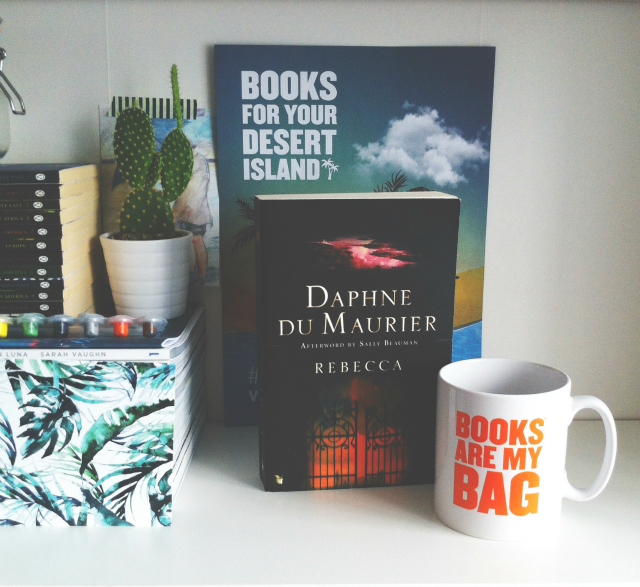 2| r e b e c c a by daphne du maurier
Working as a lady's companion, the heroine of Rebecca learns her place. Her future looks bleak until, on a trip to the South of France, she meets Max de Winter, a handsome widower whose sudden proposal of marriage takes her by surprise. She accepts, but whisked from glamorous Monte Carlo to the ominous and brooding Manderley, the new Mrs de Winter finds Max a changed man. And the memory of his dead wife Rebecca is forever kept alive by the forbidding housekeeper, Mrs Danvers.

I could be wrong but I think du Maurier would make the perfect companion for storm-ridden nights on the island. Whilst I've not read Rebecca, everybody says it is her best work. I gave Jamaica Inn five stars so surely that means I'm going to really enjoy this novel?! 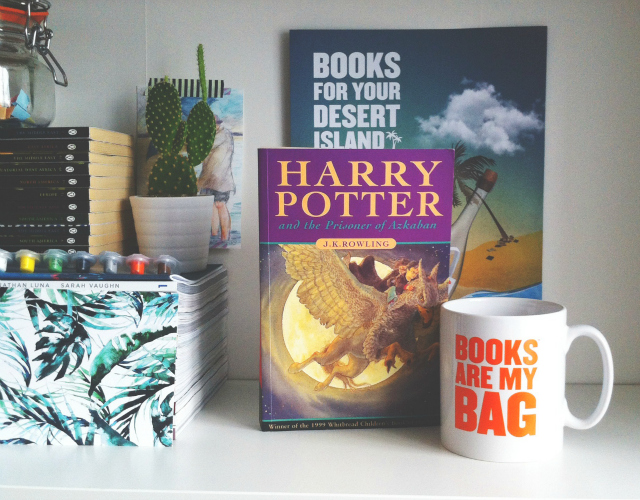 3| h a r r y  p o t t e r a n d  t h e  p o a by j. k. rowling
Harry Potter, along with his best friends, Ron and Hermione, is about to start his third year at Hogwarts School of Witchcraft and Wizardry. Harry can't wait to get back to school after the summer holidays...But when Harry gets to Hogwarts, the atmosphere is tense. There's an escaped mass murderer on the loose, and the sinister prison guards of Azkaban have been called in to guard the school....

I'm not going to apologise for taking a Harry Potter novel with me. If I'm going to be stuck on an island waiting for death, I'm going to do so with one of my favourite worlds neatly stacked at my side. Always.  This choice may be a little inspired by Dwight Schrute. 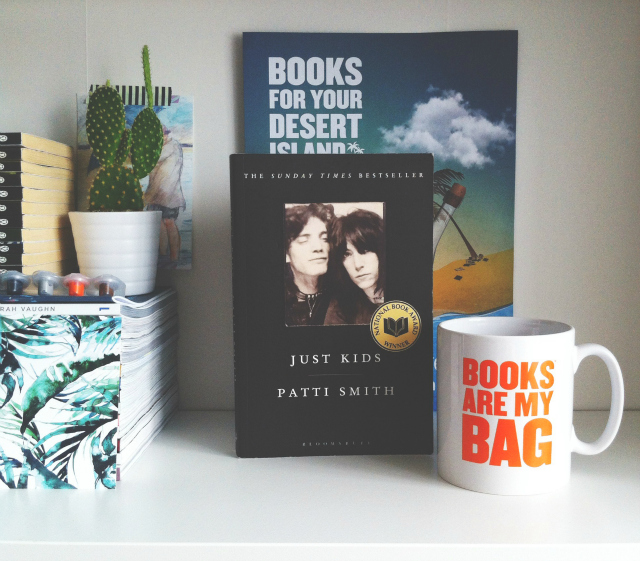 4| j u s t k i d s by patti smith
The legendary American artist offers a never-before-seen glimpse of her remarkable relationship with photographer Robert Mapplethorpe in the epochal days of New York City and the Chelsea Hotel in the late sixties and seventies.

Just Kids is one of my favourite books of all time so it would definitely be coming with me. Patti's anecdotes would be sure to keep me busy whilst I was stressing out about finding food and shitting in holes and such. 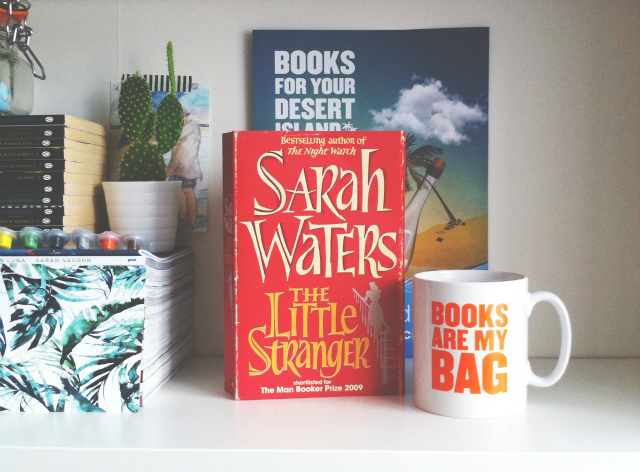 5| the little stranger by sarah waters
One post-war summer in rural Warwickshire, Dr Faraday is called to a patient at lonely Hundreds Hall. Home to the Ayres family for over two centuries, the Georgian house, once impressive and handsome, is now in decline. Its owners - mother, son, and daughter - are struggling to keep pace with a changing society, as well as with conflicts of their own. But are the Ayreses haunted by something more sinister than a dying way of life? Little does Dr Faraday know how closely, and how terrifyingly, their story is about to become intimately entwined with his.

I could be making a terrible decision taking a book which such a spoopy blurb with me to a solitary island but I'm not prepared to live out the rest of my days without reading a Sarah Waters novel. 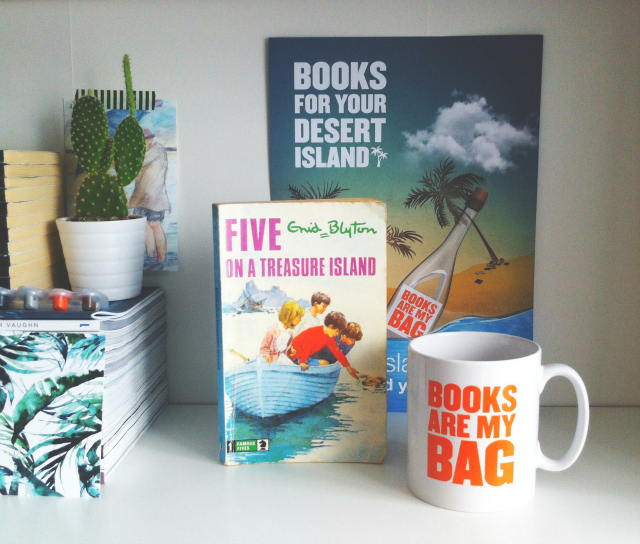 6| f i v e  on  a  t r e a s u r e  i s l a n d by enid blyton
The very first Famous Five adventure, featuring Julian, Dick, Anne, not forgetting tomboy George and her beloved dog, Timmy! There's a shipwreck off Kirrin Island! But where is the treasure? The Famous Five are on the trail - looking for clues - but they're not alone! Someone else has got the same idea. Time is running out for the Famous Five, who will follow the clues and get to the treasure first?

I spent the majority of the 1990's and early 00's reading and re-reading a handful of the Famous Five books per day. They sparked off my love of reading and, whilst I haven't read any of them in years, I think this book would be a great choice for the island. Even though I'm still petrified of Uncle Quentin... 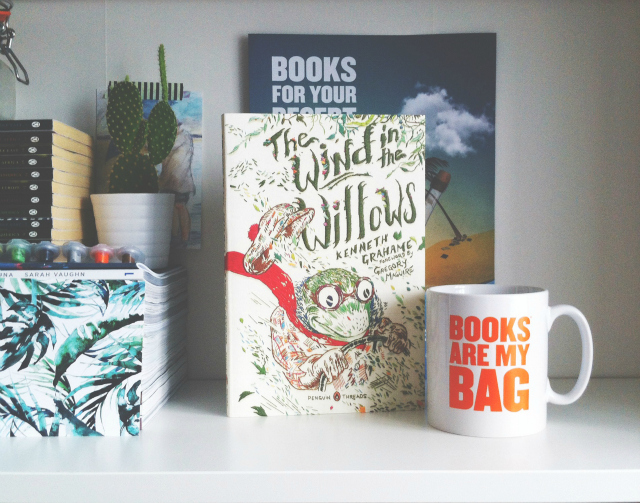 7| t h e w i n d i n t h e w i l l o w s by kenneth graeme
The tales of Ratty, Mole, Badger and Toad. When Mole goes boating with the Water Rat instead of spring-cleaning, he discovers a new world. As well as the river and the Wild Wood, there is Toad's craze for fast travel which leads him and his friends on a whirl of trains, barges, gypsy caravans and motor cars and even into battle.

Again, I'm taking another book that sparked off my love of literature many moons ago. I love everything about this novel, from its whimsical almost ethereal side, to its serious critique of Edwardian industrialisation. It's so good. 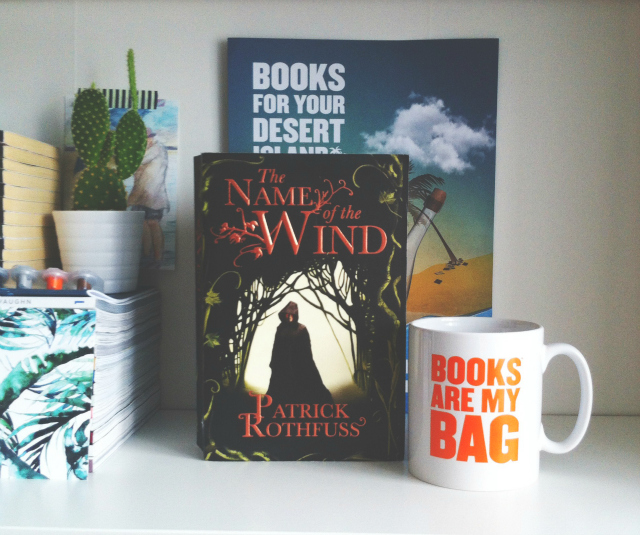 8| the name of the wind by patrick rothfuss
This is the tale of the magically gifted young man who grows to be the most notorious wizard his world has ever seen. The intimate narrative of his childhood in a troupe of travelling players, his years spent as a near-feral orphan in a crime-ridden city, his daringly brazen yet successful bid to enter a legendary school of magic, and his life as a fugitive after the murder of a king form a gripping coming-of-age story.

Whilst I don't usually tend to gravitate towards fantasy novels, I feel like I'm going to need to read a sizeable chunk of high fantasy if I'm going to be waiting around on an island without the internet. I'm going to have to devote my time to worlds far from my own if I'm to survive a situation like that, right?! Also, like with The Secret History, there are a ton of pages to burn here if I really don't like it. Practical.

And that's my lot! I would love it if you went ahead and shared your very own selection of Books Are My Bag #desertislandreads on your blog or social media channels. Don't forget to link / tag me into your picks so I can see them all! Also, don't forget to get involved with the Books Are My Bag campaign and head out to your favourite bookshops to buy up some reads to see you through the rest of the year. The people at BAMB also sent me a box of goodies to unbox to further inspire some bookshop purchases and I'll be sharing photographs of the contents over on my Instagram in due course so keep your eyes peeled for those.

What books will you be buying in bookshops this weekend? Alternatively, tell me some of your own #desertislandreads -- would you take a selection of read titles or would you switch it up like I did?

*I was contacted by the people at BAMB to help promote the campaign and I also received a box of goodies to inspire my list of #desertislandreads but I wasn't paid for this promotion. I just love books, bookshops and...did I say books?!
Labels: 2015 books