September was a quiet reading month for me, comprising of three books and one trade paperback, but I did, however, come across another five star read so I'm hailing it as a success!

One of the weeks was taken up by the #BookBuddyAThon and, whilst I didn't complete my TBR within the timeframe, I'm really glad I participated in it because I read some books that would've otherwise been sat on my shelves for a good while yet! What did you read during September? 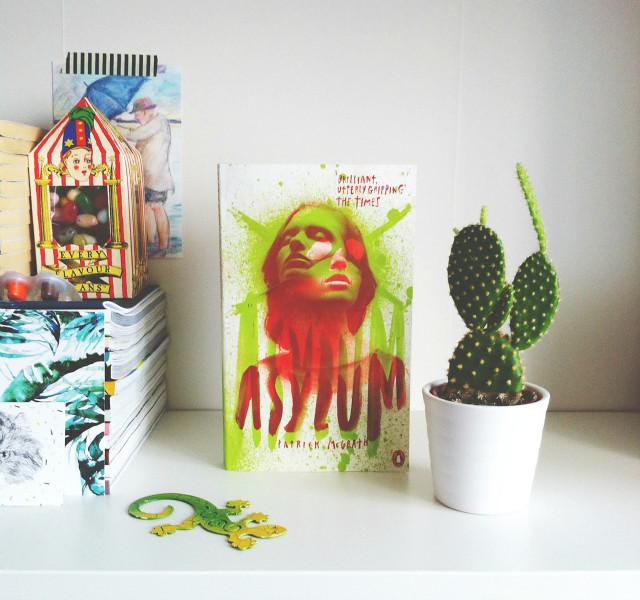 31. ASYLUM BY PATRICK MCGRATH*
finished: 06/09/15 | isbn: 0241973678 | pages: 272
In the summer of 1959 Stella Raphael joins her psychiatrist husband, Max, at his new posting -- a maximum-security hospital for the criminally insane. Beautiful and headstrong, Stella soon falls under the spell of Edgar Stark, a brilliant and magnetic sculptor who has been confined to the hospital for murdering his wife in a psychotic rage. But Stella's knowledge of Edgar's crime is no hindrance to the volcanic attraction that ensues -- a passion that will consume Stella's sanity and destroy her and the lives of those around her.

Sometimes, I read novels and accidentally begin to re-write them in my head. This, unfortunately, was one of those occasions. When I read, I try and put my writer head away for a while, to save distractions, but McGrath made a narrative decision that I found so odd, so misjudged, that I just couldn't help but feel completely let down the entire way through. This novel was about a woman who falls in love with a patient from the psychiatric hospital where her husband works. You would think then that the story would follow Stella - a character choked with trauma and internal conflict. McGrath, however, chose to forgo this narrative voice and instead told the story from her boring therapist's perspective. A cold distant perspective.

The narrative voice, as such, felt incredibly disingenuous because McGrath desperately tried to create a closeness between us and Stella through passages, such as the following, but in doing so he forgot his place, offering up anecdotes in way too much detail: ''She crossed the yard and went into the vegetable garden. He was there, and her heart sang at the sight of him [...] She leaned against the wall and felt its soft warmth through her blouse' (p27). Why on earth would he know the minutiae of Stella's daily life?! Would she have relayed her memories to him in such a way? Would she have used so much detail? I mean, sure, you could argue that she could have. However, as a real life human woman, I am going to go out on a limb and say that no other real life human woman has ever relayed a story, of some great love or otherwise, and noted the warmth of a brick wall through their blouse. Forgive me if I'm wrong but that is such a male way of exploring women's passion and desire. Women's hearts don't sing. Their blouses don't radiate brick wall warmth. The anger is bubbling up inside of me all over again.

Things picked up when McGrath started to explore ideas of a collective human madness, and I admired that, but this book didn't redeem itself for me. Stella deserved better. I deserved better. Read this if you're interested but I'm still irked. Yes, irked. 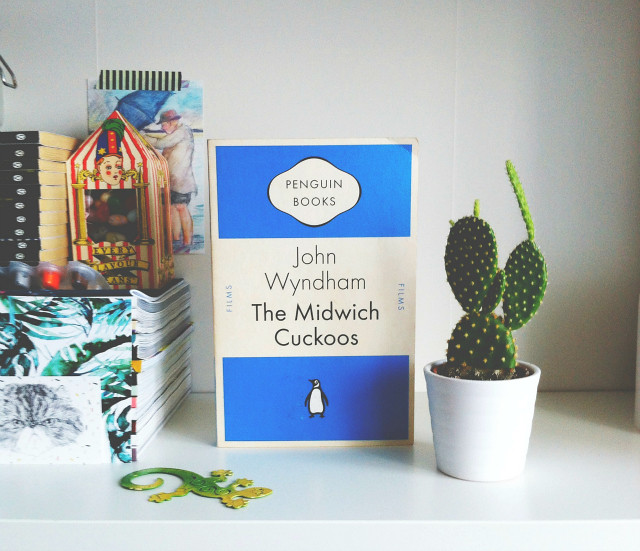 32. the midwich cuckoos by john wyndham
FINISHED: 08/09/15 | ISBN: 0141033010 | PAGES: 220
In the sleepy English village of Midwich, a mysterious silver object appears and all the inhabitants fall unconscious. A day later the object is gone and everyone awakens unharmed - except that all the women in the village are discovered to be pregnant.

I liked this. It was a very readable piece of science fiction from one of the most popular writers of the genre (or at least one of the most popular within the online book community). I would've perhaps liked this more if Wyndham went into greater detail on a few things, such as the children and Zelleby's endless sociological questions, but I respect the work that Wyndham did within so few pages, and a time when the genre was still becoming the behemoth that we know and love today.

I'm going to try out some more of Wyndham's works in the future - I hear that The Chrysalids is his best. 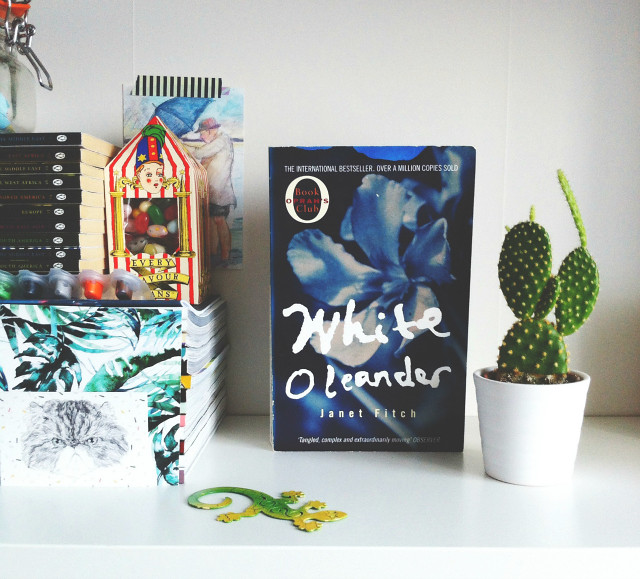 33. white oleander by janet fitch [tw: abuse / self harm / suicide]
finished: 18/09/15 | isbn: 1860498043 | pages: 390
White Oleander tells the unforgettable story of Ingrid, a brilliant poet imprisoned for murder, and her daughter, Astrid, whose odyssey through a series of Los Angeles foster homes -- each its own universe with its own laws, its own dangers, and its own hard lessons to be learned -- becomes a redeeming and surprising journey of self-discovery.

I love stories that feel like characters have lived a thousands lives from beginning to end and this was a perfect example. In White Oleander, we follow Astrid as she moves from one broken home to another, finding solace in whatever capacity she can. It is a coming of age, of sorts, but it's also so much more than that.

It's a testament to Fitch's impeccable writing style that this novel reminded me of some of the greats - Zora Neale Hurston and Alice Walker - in the way in which Astrid's character was informed by her relationships as she grows up, allowing others to influence her character, for better or for worse, as they would in real life. Whilst our experiences are quite different, I saw parts of myself in Astrid. I saw our endurance and our strength and our determination to be better and it made for a really haunting, yet oddly comforting, read.

It made me cackle. It made me cry. I genuinely have a note in my review notebook that just says: 'HOW WAS THIS ALL ONE BOOK?!'. Melodic in its cadence yet harsh and visceral with its plot, White Oleander is a novel that I will return to again and again. Read this. A lesson in great storytelling. 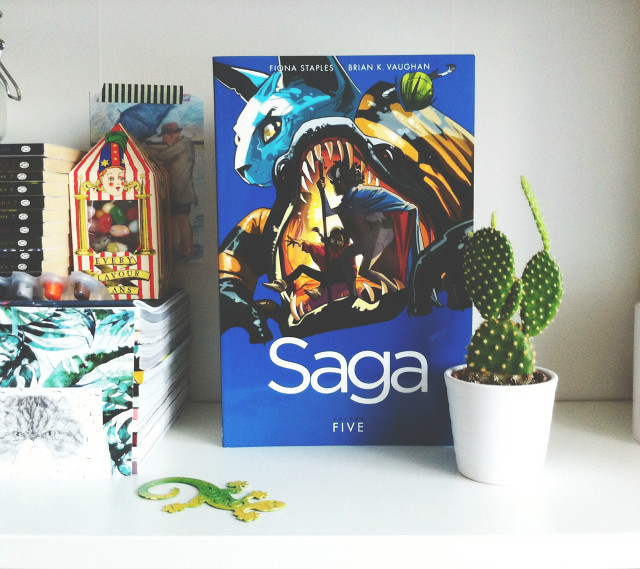 I had been anticipating this volume's release for what felt like an eternity so, of course, I had it on pre-order. I managed to wait three days after opening the package before reading it. I think that shows great restraint.

Whilst I didn't rate this as highly as the rest of the series, I really enjoyed it. It had a healthy balance of sad and seriously hilarious and, as ever, I loved the escapism it afforded me as a reader. One of the things I really like about this series is that Vaughan holds his characters accountable for their actions, allowing us to see how they get out of even the most impossible of situations. The writing is, of course, complemented by Staples' incredible art.

Whilst I'm still wholly invested in the characters, part of me really wants the pacing to be looked at. Whilst the fast paced nature of the series is something that I have lauded as a huge plus in previous reviews, I think further volumes will benefit from more time and care being taken. I felt like everything moved a little too quickly here. I could, of course, be being a little precious because I know I won't get another volume for a while...

Overall, I still really love this series and would recommend it to everyone interested in getting into the graphic novel, comic and trade paperback world.

*These books were sent to me for review purposes
This post contains affiliate links.
Labels: 2015 books