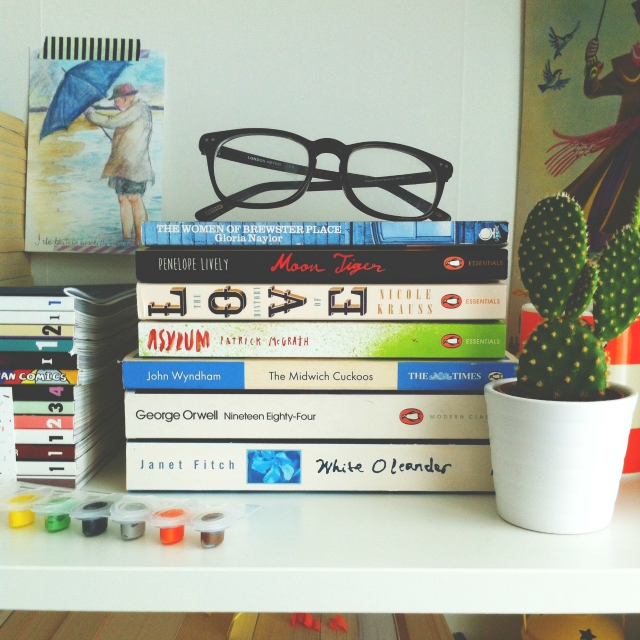 In the interests of continuing my quest to read my way through the unread books on my shelves, and after enjoying the Booktubeathon and Bout of Books last month, I am taking part in the #BookBuddyAthon. This readathon was created by Elena Reads Books and coldteandcrumbs and it runs from Monday 7th September to Sunday 13th September 2015. The idea is to team up with a fellow reader (someone online / a family member / friend / whoever) and read and chat books for the entire week. It's a really chilled readathon with some laidback challenges so it should be accessible to a wide group of people. I'm not necessarily hoping to finish all of the following books during the week. I'm just looking forward to reading things alongside someone else for the first time and maybe crossing some more unread books off my shelf as I do so.

After deciding I wanted to participate in the readathon, I sent Jennie from sailboat a message to ask her whether she would like to participate and be my bookish buddy for the week. Thankfully, she said yes! I have known Jennie online for quite a long time now, 5 years maybe, and her friendship is something that I am really grateful for.  She supports me in everything I do and I will never forget the comfort she offered me when we were both in distant relationships back in the day (with other people, I might add...). I'm really glad we both have a love of literature in common and I implore you to visit sailboat and The Book Journal if you haven't already done so. Onto the books that I wish to read during the readathon...


1. choose three books and get your buddy to pick one from them for you to read
Jennie had to choose from The Women of Brewster Place by Gloria Naylor, Moon Tiger* by Penelope Lively and The History of Love* by Nicole Krauss. She went for Moon Tiger - a tale about an elderly woman exploring a world history, her very own personal history, from her hospital bed. It's only just over 200 pages so I'm intrigued as to how Lively is going to build a character with such a rich history within so few pages but I am hopeful!

White Oleander tells the unforgettable story of Ingrid, a brilliant poet imprisoned for murder, and her daughter, Astrid, whose odyssey through a series of Los Angeles foster homes -- each its own universe with its own laws, its own dangers, and its own hard lessons to be learned -- becomes a redeeming and surprising journey of self-discovery.

Both Jennie and I had previously picked up this book but put it on the backburner for reasons neither of us can really remember nor fathom so we thought we'd make a good go of it this time and buddy read it together. I haven't read a lot of books of late that focus on the mother daughter dynamic so that's something I'm really looking forward to exploring in this book. I bought this back in January and featured it in my secondhand book haul after seeing a handful of my Goodreads friends rave about it so I've got high hopes for this one.

3. read a book with your buddy's favourite colour on
the midwich cuckoos by john wyndham
In the sleepy English village of Midwich, a mysterious silver object appears and all the inhabitants fall unconscious. A day later the object is gone and everyone awakens unharmed - except that all the women in the village are discovered to be pregnant.

Jennie's favourite colour is blue so I have decided to delve into the world of science fiction and read my first bit of John Wyndham! I bought this during the IBW bookshop crawl back in July 2014 so it only seems right to wave goodbye to the last days of summer with it this year.

4. read a book your buddy gave 5 stars
1984 by george orwell
Hidden away in the Record Department of the sprawling Ministry of Truth, Winston Smith skillfully rewrites the past to suit the needs of the Party. Yet he inwardly rebels against the totalitarian world he lives in, which demands absolute obedience and controls him through the all-seeing telescreens and the watchful eye of Big Brother, symbolic head of the Party. In his longing for truth and liberty, Smith begins a secret love affair with a fellow-worker Julia, but soon discovers the true piece of freedom is betrayal.

I feel like this book is some sort of rite of passage for readers so I'm hoping to finally get round to reading it this week after putting it off for a long time. Some of you guys may remember that I featured it in my list of books to read in 2014. Yup, still not read it...Jennie gave it five stars and I'm hoping to do so too! We shall see!

5. read a book that you want to read...just because!
asylum by patrick mcgrath*
In the summer of 1959 Stella Raphael joins her psychiatrist husband, Max, at his new posting -- a maximum-security hospital for the criminally insane. Beautiful and headstrong, Stella soon falls under the spell of Edgar Stark, a brilliant and magnetic sculptor who has been confined to the hospital for murdering his wife in a psychotic rage. But Stella's knowledge of Edgar's crime is no hindrance to the volcanic attraction that ensues -- a passion that will consume Stella's sanity and destroy her and the lives of those around her.

I'm steadily working my way through the Penguin Essentials that I featured in my August book haul and this one stood out as something that I would quite like to read sooner rather than later. It sounds like something I will sail through once I get started so I think I'll read it towards the start of the week to create some momentum!


There's still time to ask a bookish buddy to participate so feel free to get involved! I will no doubt be sharing my progress on INSTAGRAM and TWITTER so make sure you're following me on those platforms to keep up to date. Are you taking part? If so, what will you be reading? If you can't take part, let me know what you're hoping to read next week anyway!

*I was sent this book for review purposes

This post features a couple of affiliate links, meaning if you click on them and buy books I will earn a tiny commission to put towards books to review in the future.
Labels: 2015 books tbr