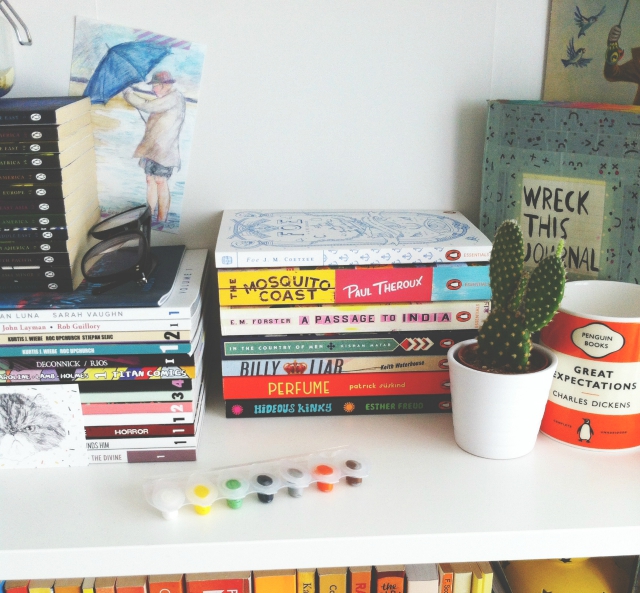 I'm still busy working my way through all the unread books on my shelves so, again, I didn't buy many books myself during the month of August. However, much to my delight and surprise, I ended up receiving some exciting bookish mail so I've still got lots of great stuff to show you.

penguin essentials These books were sent to me for review purposes.
I got a really exciting message at the beginning of the month from Penguin asking if I would like to receive the new additions to the Penguin Essentials series and, of course, I had to say yes. The 'Essentials' collection consists of some of the books that Penguin deem to be the most important of the twentieth century, with titles that are still as poignant and relevant today as they were when they were first published. I actually own a few of the first round in the series (Lolita, Lucky Jim and In Cold Blood) so I was pretty excited to add to my own collection of these backpack-friendly tomes. They're smaller than usual trade paperbacks so they're great for travelling around with. I have already read Hideous Kinky and Perfume, so keep your eyes peeled for those reviews soon. Which cover is your favourite? I'll start with one of mine... 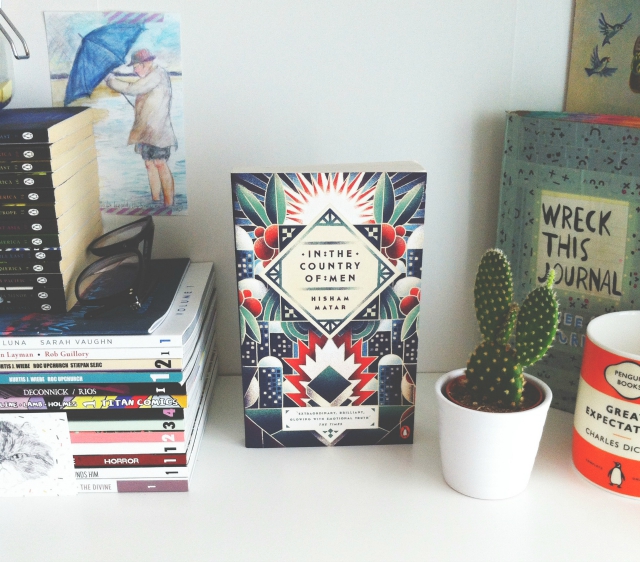 in the country of men by hisham matar*
Libya, 1979. 9 year old Suleiman's days are circumscribed by the narrow rituals of childhood [...] But his nights have come to revolve around his mother's increasingly disturbing bedside stories full of old family bitterness. And then one day Suleiman sees his father across the square of a busy marketplace, his face wrapped in a pair of dark sunglasses. Wasn't he supposed to be away on business yet again? Why is he going into that strange building with the green shutters? Why did he lie? Suleiman is soon caught up in a world he cannot hope to understand - where the sound of the telephone ringing becomes a potent of grave danger; where his mother frantically burns his father's cherished books; where a stranger full of sinister questions sits outside in a parked car all day; where his best friend's father can disappear overnight, next to be seen publicly interrogated on state television. 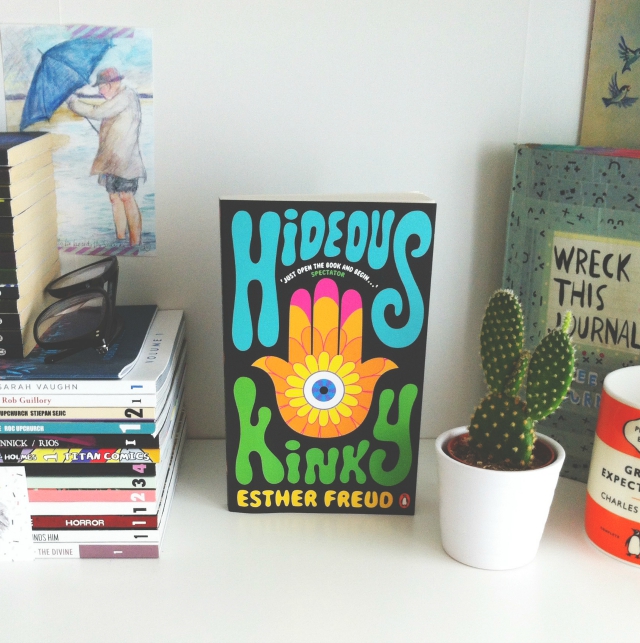 hideous kinky by esther freud*
Two little girls are taken by their mother to Morocco on a 1960s pilgrimage of self-discovery. For Mum it is not just an escape from the grinding conventions of English life but a quest for personal fulfillment; her children, however, seek something more solid and stable amidst the shifting desert sands. 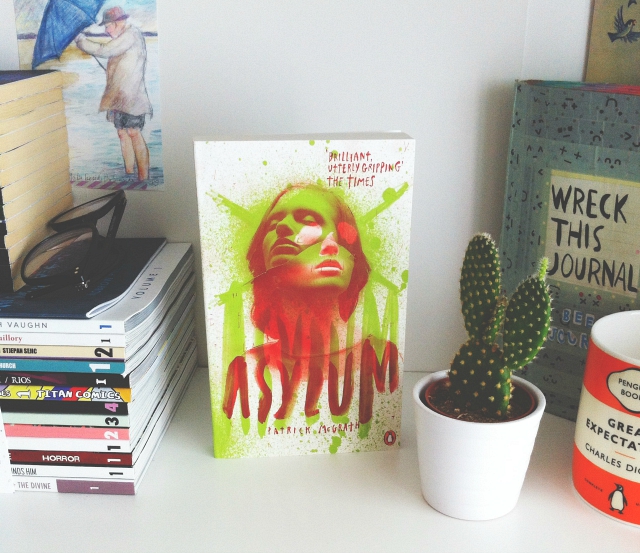 asylum by patrick mcgrath*
In the summer of 1959 Stella Raphael joins her psychiatrist husband, Max, at his new posting -- a maximum-security hospital for the criminally insane. Beautiful and headstrong, Stella soon falls under the spell of Edgar Stark, a brilliant and magnetic sculptor who has been confined to the hospital for murdering his wife in a psychotic rage. But Stella's knowledge of Edgar's crime is no hindrance to the volcanic attraction that ensues -- a passion that will consume Stella's sanity and destroy her and the lives of those around her. 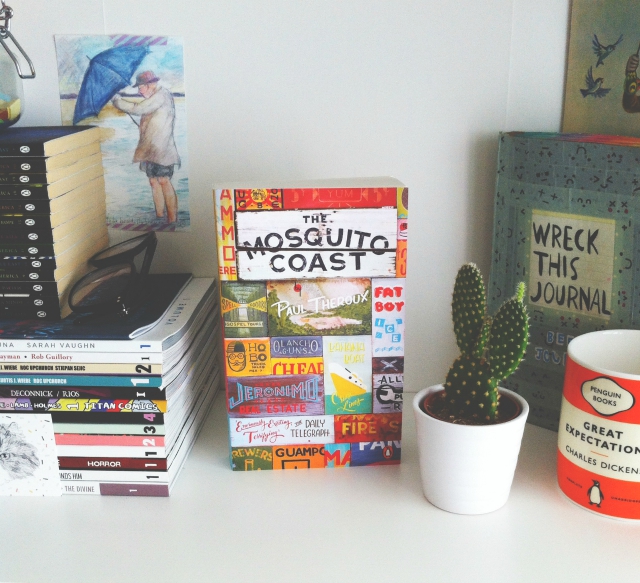 the mosquito coast by paul theroux*
Allie Fox is going to re-create the world. Abominating the cops, crooks, junkies and scavengers of modern America, he abandons civilisation and takes his family to live in the Honduran jungle. There his tortured, messianic genius keeps them alive, his hoarse tirades harrying them through a diseased and dirty Eden towards unimaginable darkness. 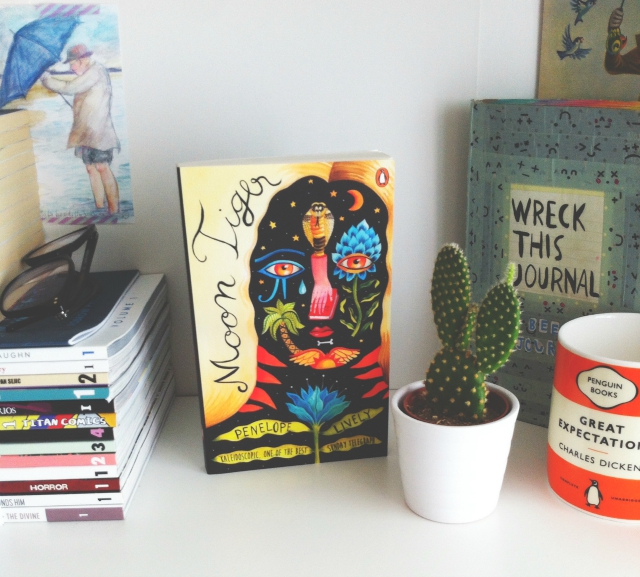 moon tiger by penelope lively*
The elderly Claudia Hampton, a bestselling author of popular history; lies alone in a London hospital bed. Memories of her life still glow in her fading consciousness, but she imagines writing a history of the world. Instead, Moon Tiger is her own history, the life of a strong, independent woman, with its often contentious relations with family and friends. At its center - forever frozen in time, the still point of her turning world - is the cruelly truncated affair with Tom, a British tank commander whom Claudia knew as a reporter in Egypt during World War II. 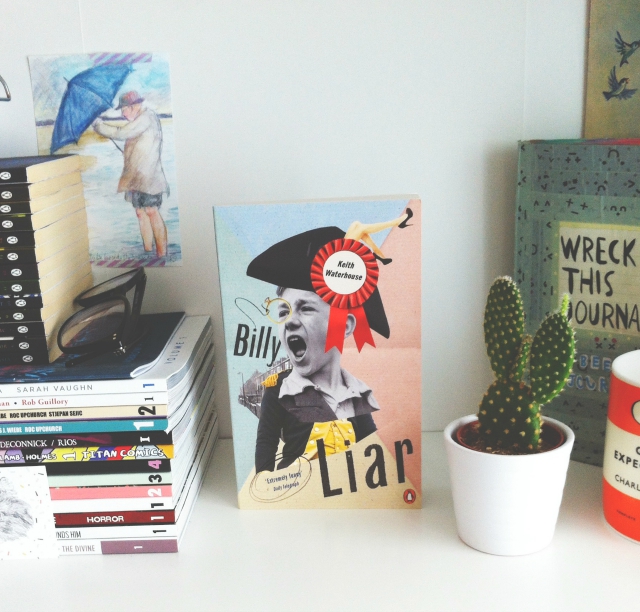 billy liar by keith waterhouse*
Billy Liar tells the story of Billy Fisher, a Yorkshire teenager unable to stop lying - especially to his three girlfriends. Trapped by his boring job and working-class parents, Billy finds that his only happiness lies in grand plans for his future and fantastical day dreams of the fictional country Ambrosia. 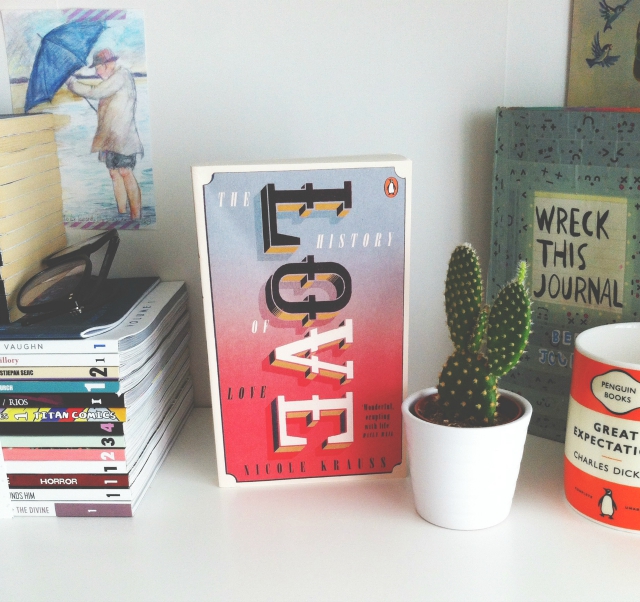 the history of love by nicole krauss*
Leo Gursky taps his radiator each evening to let his upstairs neighbour know he's still alive. But it wasn't always like this: in the Polish village of his youth, he fell in love and wrote a book. Sixty years later and half a world away, fourteen-year-old Alma, who was named after a character in that book, undertakes an adventure to find her namesake and save her family. sands. 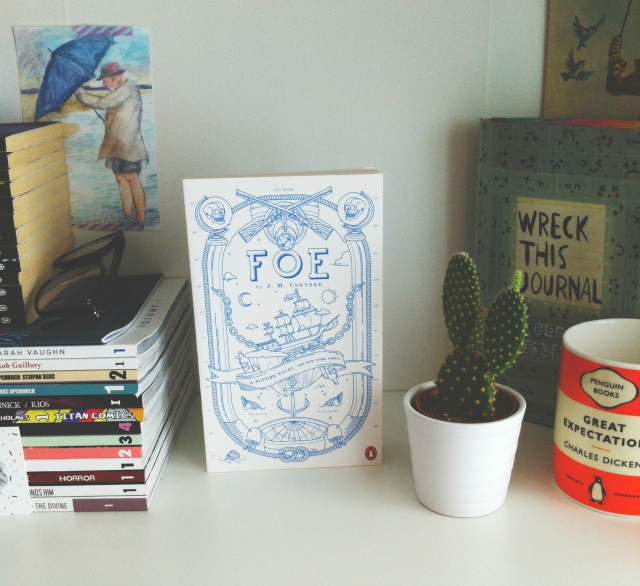 foe by j. m. coetzee*
In an act of breathtaking imagination, J. M. Coetzee radically reinvents the story of Robinson Crusoe. In the early eighteenth century, Susan Barton finds herself adrift from a mutinous ship and cast ashore on a remote desert island. There she finds shelter with its only other inhabitants: a man named Cruso and his tongueless slave, Friday. In time, she builds a life for herself as Cruso's companion and, eventually, his lover. At last they are rescued by a passing ship, but only she and Friday survive the journey back to London. Determined to have her story told, she pursues the eminent man of letters Daniel Foe in the hope that he will relate truthfully her memories to the world. But with Cruso dead, Friday incapable of speech and Foe himself intent on reshaping her narrative, Barton struggles to maintain her grip on the past, only to fall victim to the seduction of storytelling itself. 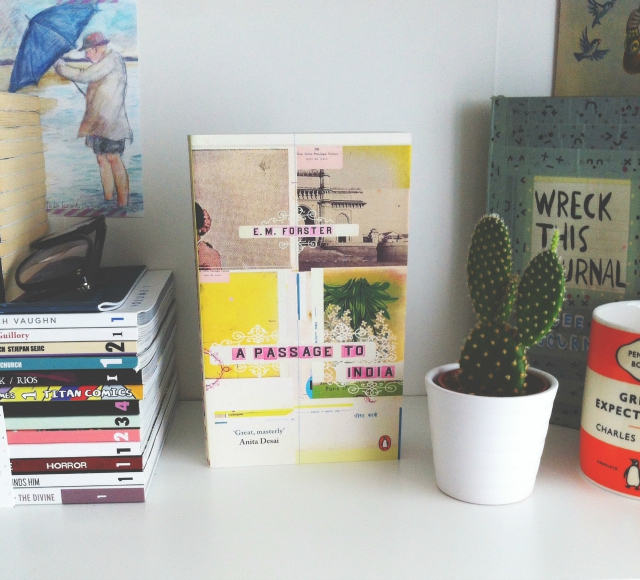 a passage to india by e. m. forster*
When Adela Quested and her elderly companion Mrs Moore arrive in the Indian town of Chandrapore, they quickly feel trapped by its insular and prejudiced 'Anglo-Indian' community. Determined to escape the parochial English enclave and explore the 'real India', they seek the guidance of the charming and mercurial Dr Aziz, a cultivated Indian Muslim. But a mysterious incident occurs while they are exploring the Marabar caves with Aziz, and the well-respected doctor soon finds himself at the centre of a scandal that rouses violent passions among both the British and their Indian subjects. 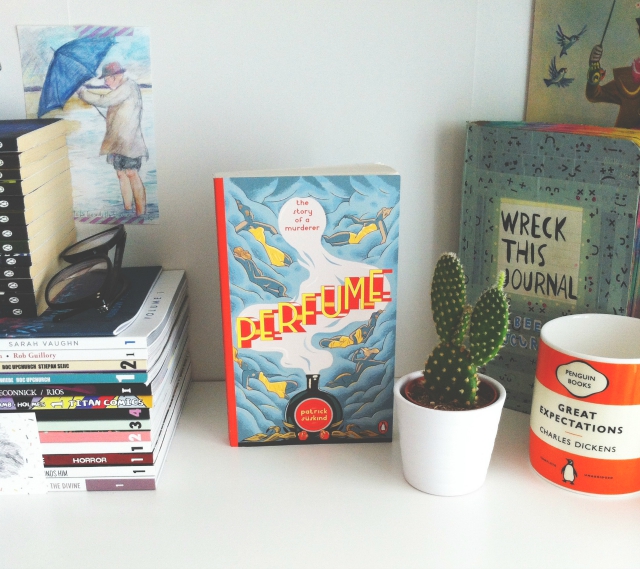 perfume by patrick suskind*
In the slums of eighteenth-century France, the infant Jean-Baptiste Grenouille is born with one sublime gift - an absolute sense of smell. As a boy, he lives to decipher the odors of Paris, and apprentices himself to a prominent perfumer who teaches him the ancient art of mixing precious oils and herbs. But Grenouille's genius is such that he is not satisfied to stop there, and he becomes obsessed with capturing the smells of objects such as brass doorknobs and fresh-cut wood. Then one day he catches a hint of a scent that will drive him on an ever-more-terrifying quest to create the 'ultimate perfume' - the scent of a beautiful young virgin.

gift from grandma
I received a package from my Grandma containing a book that she wasn't really getting along with so, knowing how much I love to read, she thought she would send it my way in the hope that I would like it more. I haven't read this author before but I have heard of her through others so I think I'll keep this book and see how I get along with it somewhere down the line. 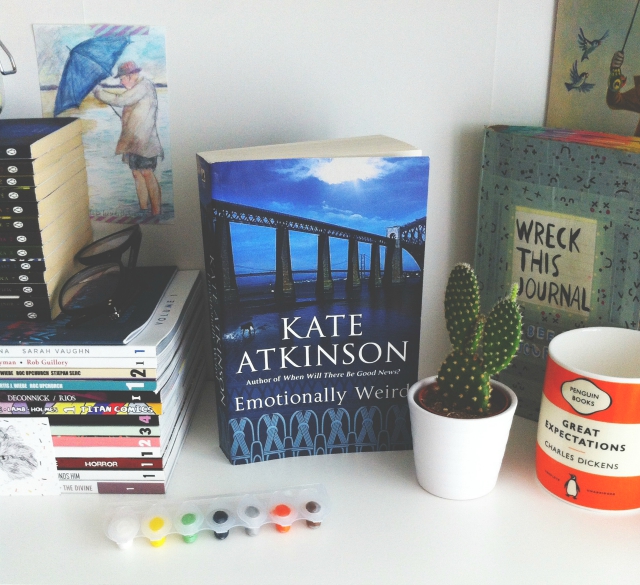 emotionally weird by kate atkinson
On a weather-beaten island off the coast of Scotland, Effie and her mother, Nora, take refuge in the large, mouldering house of their ancestors and tell each other stories. Nora, at first, recounts nothing that Effie really wants to hear -- like who her real father was. Effie tells various versions of her life at college, where in fact she lives in a lethargic relationship with Bob, a student who never goes to lectures, seldom gets out of bed, and to whom Klingons are as real as Spaniards and Germans. But as mother and daughter spin their tales, strange things are happening around them. Is Effie being followed? Is someone killing the old people? And where is the mysterious yellow dog?

suprise mail! This book was sent to me for review purposes.
Sometimes publishers send me books out of the blue and I end up with surprise mail to open. It's like having a few miniature Christmases throughout the year! As you probably know, I love reading short stories so this little sampler of Penguin's upcoming volumes on the British short story is right up my street. I definitely want to add the physical books to my collection once they have been released in full later this year. You should check out my post on how to write short stories if you haven't already done so! 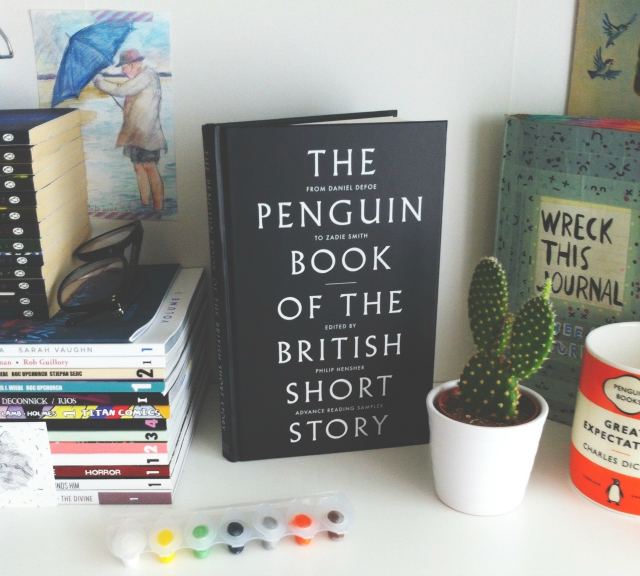 I sort of broke my book buying ban in order to purchase one of my favourite books in 'very good' secondhand condition in an edition that is currently out of print. I'm really happy to finally own it and I'm hoping to pencil in a little re-read next year in order to encourage as many people as possible to pick it up! I absolutely love these Virago designer editions. I'm after the DuMaurier ones next! 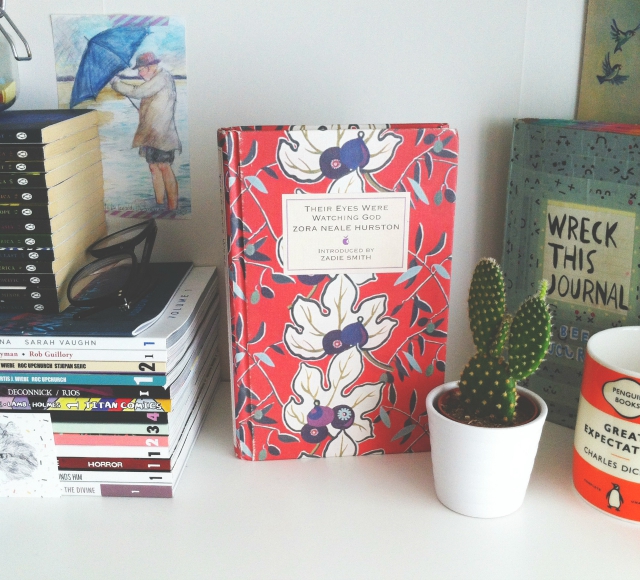 their eyes were watching god by zora neale hurston
. When Janie, at sixteen, is caught kissing shiftless Johnny Taylor, her grandmother swiftly marries her off to an old man with sixty acres. Janie endures two stifling marriages before meeting the man of her dreams, who offers not diamonds, but a packet of flowering seeds.