After a billion years of stopping and starting, I have finally finished my degree! That's right guys, miracles do happen! As university work took up all of my time over the past few months, I'm here to share my belated March and April book hauls with you...in the month of May. My January - May mini book reviews will also be with you in due course...

I had been sitting on £35 worth of bookish gift cards from Christmas and last year's BAMB campaign and, in need of a little retail therapy, I thought I'd spend them and take a day off from writing to read quietly from the comfort of my armchair. I ended up reading three out of the four of my purchases within the space of an afternoon. Bliss! 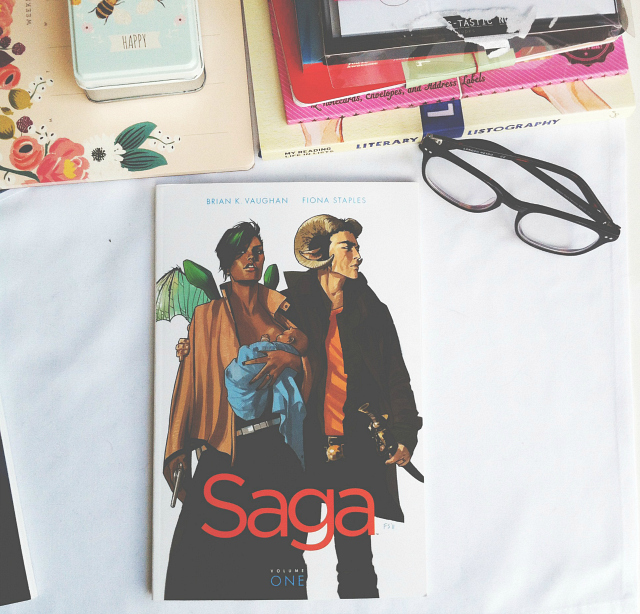 SAGA VOLUME 1 BY BRIAN K. VAUGHAN & FIONA STAPLES
When two soldiers from opposite sides of a never-ending galactic war fall in love, they risk everything to bring a fragile new life into a dangerous old universe.

Everybody had been telling me how great this graphic novel series was but I resisted the temptation for years because I am an absolute idiot. I'll let you know a bit more about this one in the near future but rest assured that I ABSOLUTELY LOVED IT AND YOU NEED TO GET YOUR HANDS ON IT RIGHT NOW BECAUSE IT'S GREAT! 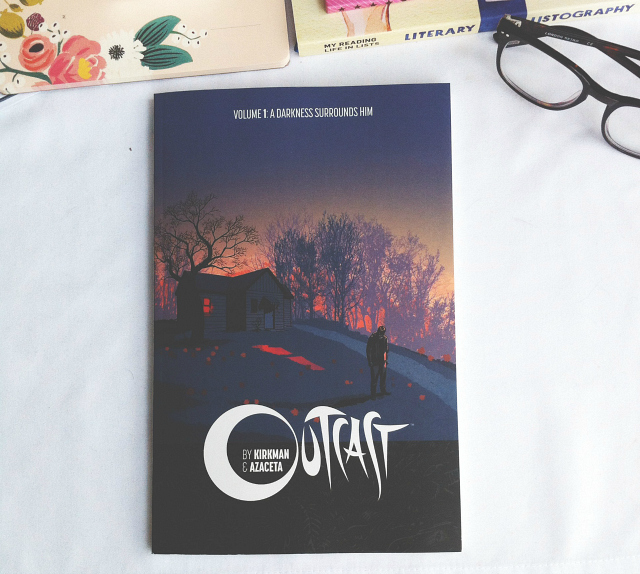 OUTCAST BY KIRKMAN & AZCETA
Kyle Barnes has been plagued by demonic possession all his life and now he needs answers. Unfortunately, what he uncovers along the way could bring about the end of life on Earth as we know it.

I'm a big fan of The Walking Dead so when I heard that Robert Kirkman had embarked on a new graphic novel series, I knew I had to give it a try. Demonic possession? Bucket loads of inner turmoil? What's not to love. The cover art may have swayed me...More on this one in my upcoming review but I think it's something that I'll be carrying on with. 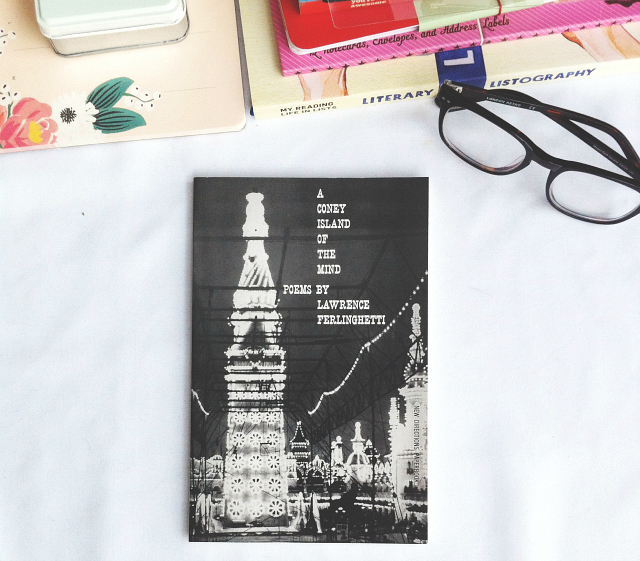 a coney island of the mind by lawrence ferlinghetti
Written in the conservative post-war 1950s, his poems still resonate, as they will continue to resonate, with a joyful anti-establishment fervor that beats a rhythmic portrait of humanity. Ferlinghetti sings of a world in which "the heart flops over / gasping Love" [...] where "we are the same people / only further from home / on freeways fifty lanes wide"

I'd heard Matthew talk about this collection a while ago and I felt inspired to pick it up. I have little to no expectations because I have no idea what Ferlinghetti's work is like, really, or where it sits but I kinda like that! 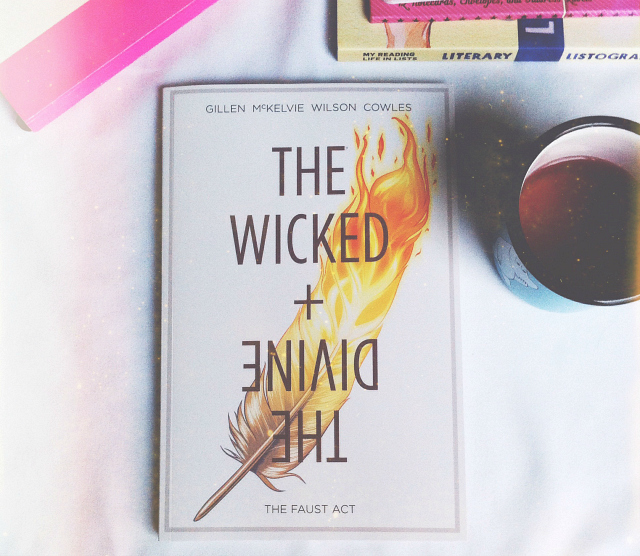 the wicked + the divine by jamie mckelvie & kieron gillen
Everyone 90 years or so, twelve gods incarnate in the bodies of the young. They are charismatic and brilliant. They stand before crowds, speak in tongues, and send them into rapture. They're rumored to perform secretive miracles. They saw people's lives, either metaphorically or literally. They are loved. They are hated. They are brilliant. Within two years, they're dead.

Everyone had been talking about this graphic novel, and the stunning art work completely sold me on the idea of owning it. Unfortunately, I wasn't crazy about it but, again, more on that soon! 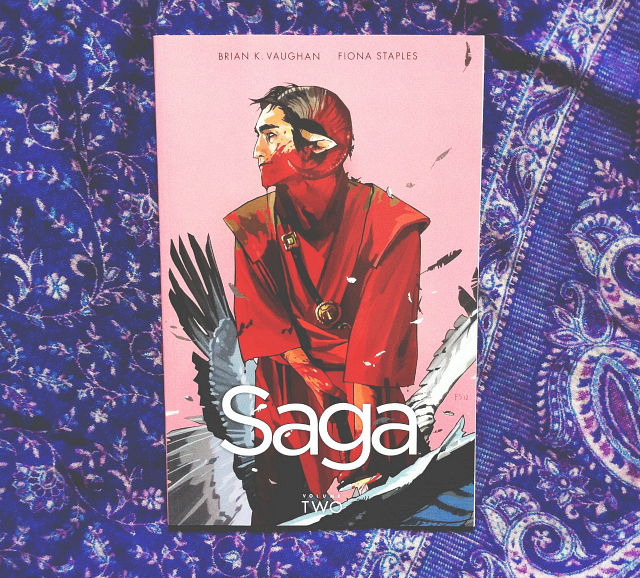 I enjoyed the first volume so much that I went straight out and ordered the follow up. After a two day wait, I had it in my hands. Thank you, Waterstones click and collect! What a time to be alive, people. This was just as incredible as the first volume and, again, well worth the purchase!

I didn't intend to spend any of my own money on books throughout March and April but I did anyway because yolo. I need to be stopped...No I don't, I'm incredible. 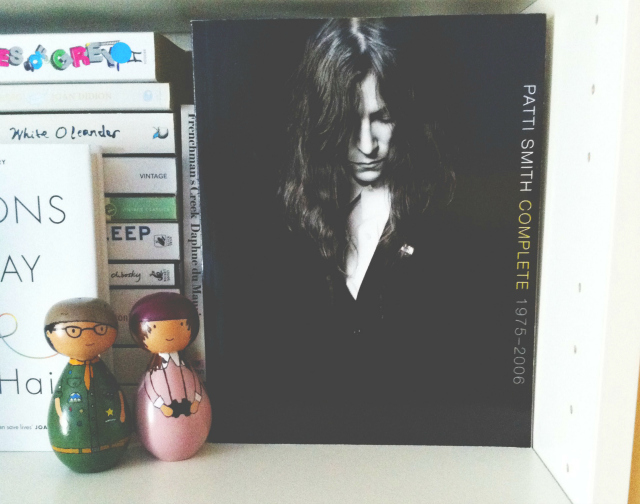 Patti Smith Complete is a living commemoration of Smith's unique contribution to music and the empowerment of people through her message of work, love and charity.

Just Kids is one of my favourite books ever, so this collection seemed like an ideal follow up purchase. It's full of lyrics and stories and photographs and I imagine it'd make a beautiful coffee table tome. I'm going to leisurely flick through this beauty on days where I'm having a bit of a creative lull. 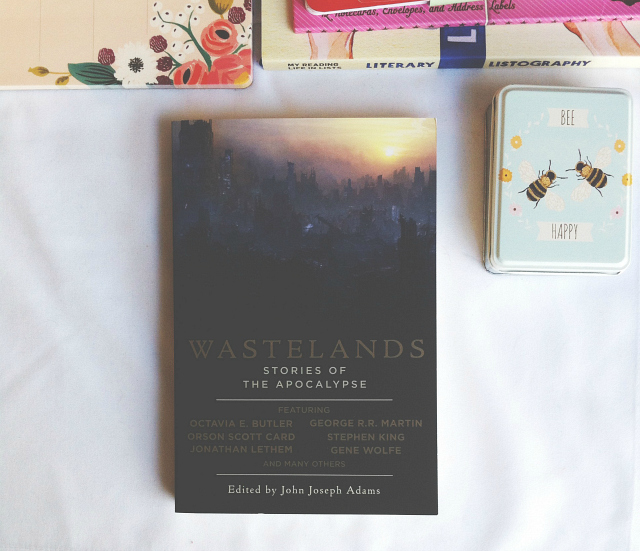 WASTELANDS: STORIES OF THE APOCALYPSE by various authors
Wastelands delves into this bleak landscape, uncovering the raw human emotion and heart-pounding thrills at the genre's core.

I had been writing a post-apocalyptic collection for my final major project at university so I thought this would be a useful collection to have at hand. Unfortunately, again, I'm a bit of an idiot and didn't get round to reading any of them prior to my hand in. Top student, me. However, I'm intending to do so soon. It seems like there is quite a diverse range of tales in this volume so it might be a good one to pick up if you're a fan of the genre. 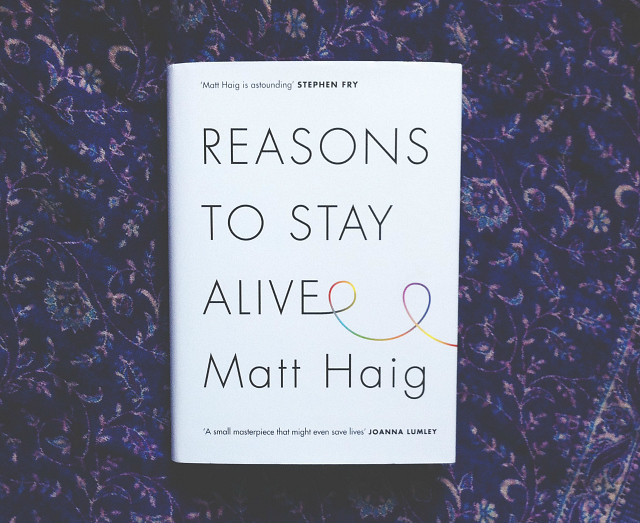 reasons to stay alive by matt haig
In the western world the suicide rate is highest amongst men under the age of 35. Matt Haig could've added to that statistic when, aged 24, he found himself starting at a cliff edge about to jump off. This is the story of why he didn't, how he recovered and learned to live with anxiety and depression. It's also an upbeat, joyous and very funny exploration of how to live better, love better, read better and feel more.

If you read my post the other day for #MHAW, you'll know that I have dealt with mental health problems for nearly all of my life so I thought I'd give this a read whilst I had a few spare afternoons. Interestingly, I actually have a teeny tiny cameo in this book (and they mistyped my twitter handle but we'll let that go...)! 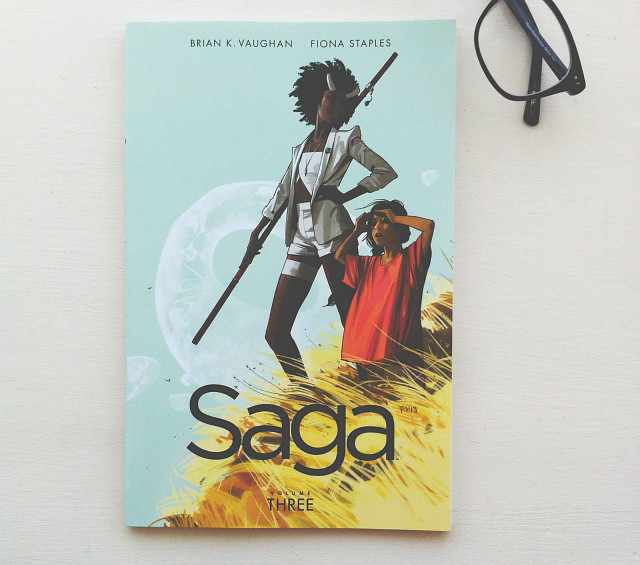 saga volume 3 by brian k. vaughan and fiona staples
After being introduced to the Saga world in March, I had to buy the next volumes the following month. I should probably try and string some coherent opinions together about Saga but I just can't. Pick it up from your local library or buy a copy or find someone kind to lend you their copies because it's great! 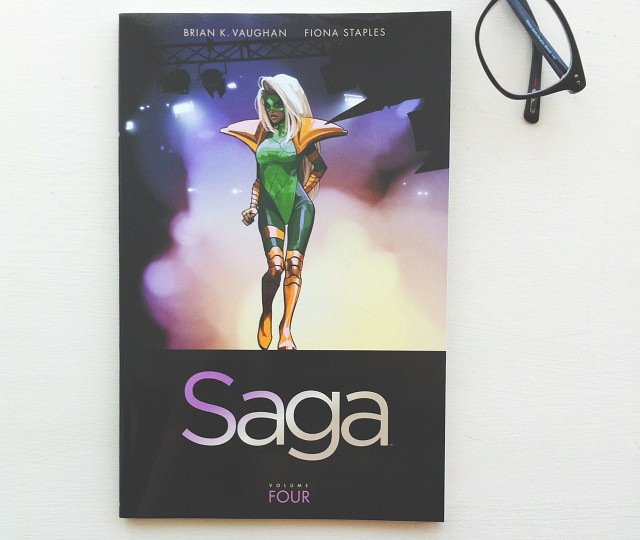 ARE YOU BORED YET?! Saga just seems to get even better as it goes on, and that's coming from someone who has rated all of the volumes 5* so far! It's fun, fast paced and packed full of fascinating characters. I'm upset that I don't have any other volumes to read but I'll try and persevere...

My friend Leena had heard that I was going through a bit of a rough patch so she sent me a care package of books and chocolate to make me feel a bit better. She works for Icon Books, so I knew I was in for a non-fiction flavoured treat. I met Leena last year at an event and I can confirm that she is a lovely human being with great hair so you should check out her channel, justkissmyfrog and subscribe if you are interested in doing so! 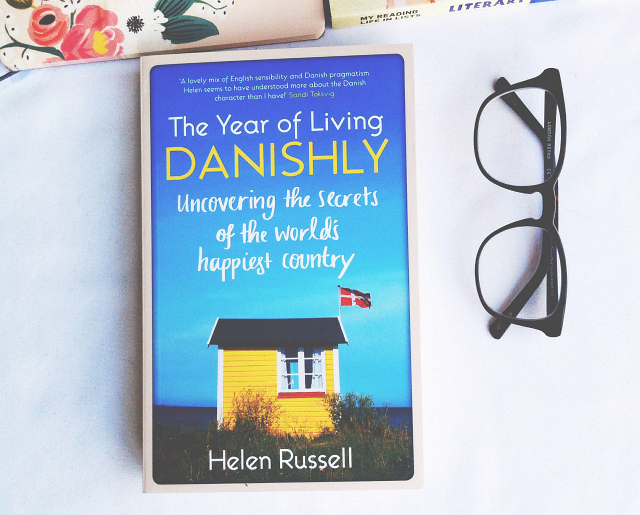 the year of living danishly*... by helen russell
Denmark is officially the happiest nation on Earth. When Helen Russell is forced to move to rural Jutland, can she discover the secrets of their happiness? Or will the long, dark winters and pickled herring take their toll?

Travel writing is something that I really love to delve into over the summer months, so I was pleasantly surprised to find this book in the package. I've always been interested in the Scandinavian countries, particularly in relation to things like happiness and wellbeing, so this should be an interesting read. 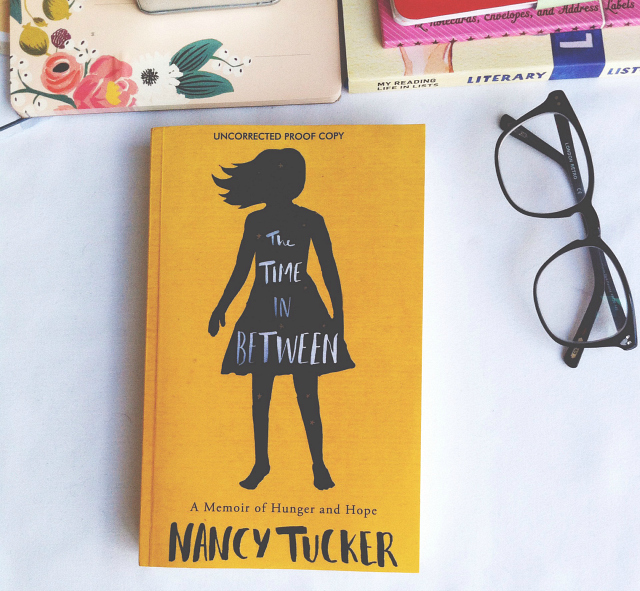 the time in between* by nancy tucker
When Nancy Tucker was 8...her class had to write about what they wanted in life. She thought...she wrote: 'I want to be thin'. Over the next 12 years, she developed anorexia nervosa...

I have seen this book everywhere lately *well done, Leena* and from what I have heard so far it is for a good reason. I'm not sure when / if I will read this one, as I'm a little bit wary about reading things that discuss disordered eating. However, if I don't feel up to it, I'll be sure to send this to a loving home that will give it the attention it deserves. If you'd like to know more about Nancy's experiences, Leena actually did a video with her not long ago that you can go and check out. Handy! 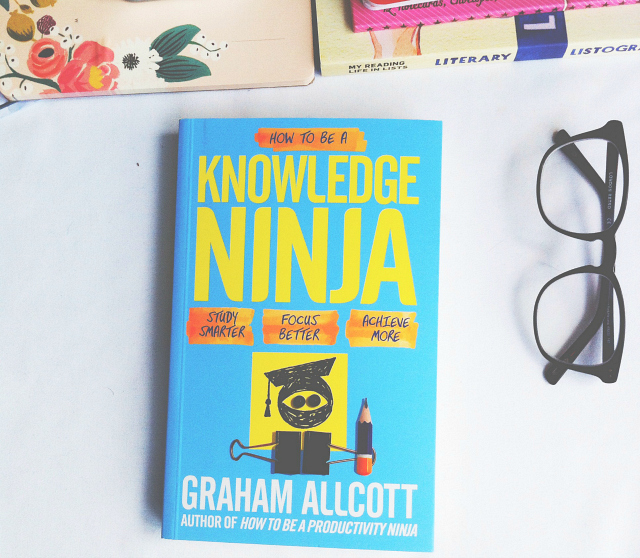 - lolling so much at how perfectly straight this photograph is

how to be a knowledge ninja* by graham allcott

How to be a Knowledge Ninja is a fun, accessible and practical guide on how to get the most out of your studying and love the quest for knowledge again

I kind of hope this book doesn't miraculously cure all of my bad habits and procrastination because I have just finished my degree and that would just be a complete kick in the face. There's always time to fix bad habits though, I guess. Graham has worked with some pretty huge companies so I'm expecting big things! Leena also filmed a video with Graham so you can check that out too!