10 Songs To Listen To: The Cure 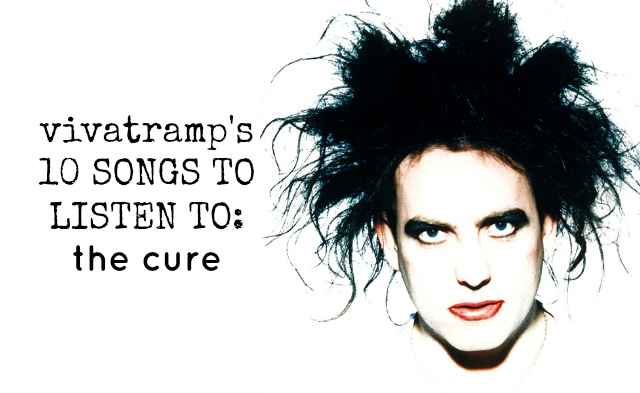 If you cast your minds back a couple of months, you'll remember that I shared 12 Arcade Fire Songs To Listen To and had a bloody whale of a time so I thought I'd return to that idea and share some of my favourite songs by another of my favourite bands, The Cure. Luckily enough for you, I'm going to keep this one a lot shorter and less academic essay-like. You can all breathe a sigh of relief! Interestingly, I have no idea when or how I got into The Cure. It feels like they've always been a band that I've listened to and enjoyed due to their incredible depth of sound, mesmerizing lyrics and iconic look. If you're a fan, let me know what your favourite songs are in the comments. If not, let me know what songs and albums mean a great deal to you!

just like heaven {kiss me, kiss me, kiss me - 1987}
Where do you even begin with a song like Just Like Heaven? With poetic melodies aplenty and Smith's own lyrical brand of melancholic whimsy, it's the sort of song that makes you feel like you're flying through space or lying deep in the ocean. Whilst some listeners have suggested that this song is about reaching orgasm, ooh err, Robert Smith himself has said that it's about completely falling head over heels in love. The process of falling in love isn't one of the easiest things to verbalise but Smith captures it perfectly in the image of spinning on that dizzy edge. A song about the intensity that comes with romantic love, he actually wrote this about his wife, Mary, who features in the video with him. Smith once told a magazine that this song embodies the idea that 'one night like that is worth 1,000 hours of drudgery'. Yup, my heart just melted. It could probably stay in my top 3 favourite songs of all time on that sentiment alone. A must listen.

in between days {the head on the door - 1985}
From the very first note of this song, it feels like you're being strapped into a rollercoaster before embarking on three minutes of both elation and fear. I think that's the best way to describe it! Despite its musings on fear, shitty decisions and loss, In Between Days is actually incredibly uptempo and manic. I think that's one of the things I love about The Cure. They know that emotions are complex and they present them as such, meaning we are treated to a heady dose of mania when the song could have easily been a shit-I-love-two-people-what-do-I-do style ballad. This song is just great fun - you seriously haven't lived until you've driven around in the car with this on full blast!


high {wish - 1992}
High is about one of two things - a) loving everything about a person so much that it consequently makes you a better person. When I see you sky as a kite / As high as I might / I can't get that high / The how you move / The way you burst the clouds / It makes me want to try b) realising you've lost the love of your life. The lyrics are somewhat akin to lines written by Romantic poets, as they're almost Shelley-esque in their tone. Interestingly, the narrator seems to have an almost childlike devotion to the woman he is singing about: And when I see you take the same sweet steps / You used to take / I know, I'll keep on holding you in arms so tight / I'll never let you go. I just absolutely love the bit in the video where Robert is flying above the clouds tied to a kite, as that's pretty much how I feel every time I listen to one of their songs.


a letter to elise {wish - 1992}
Time for a slower one, I think! This is one of my most favourite songs by The Cure because it's packed with so much honesty and emotion. It's just sublime. It almost feels like an elegy for lost love in a relationship, with the narrator lamenting that he'll never be able to make (her) eyes catch fire the way they should, asking why they should make-believe (they) never needed any more than this. However, it would seem that the narrator has sort of ruined love for himself by romanticizing this woman and their relationship to the point where it is no longer enough: I thought you were the girl I always dreamed about / But I let the dream go / And the promises broke / And the make believe ran out. Smith wrote it at a time when he was experiencing depression and he has said himself that it's a stream of consciousness piece referring to many things in his personal life, in particular 'resignation in the face of inevitable change'. Resignation haunts the whole song and does so to the point where it becomes mesmerizing to listen to. The MTV Unplugged version of this song is also incredibly beautiful so check that out too!


why can't i be you? {kiss me, kiss me, kiss me - 1987}
If you ever see me or hear me listening to this song, you can pretty much guarantee that I'll be bouncing along to it like an absolute idiot. Robert tends to give 100 different answers in interviews when asked what his songs mean or where they came from, so the origins of this song are a tad unknown. However, the narrator is certainly driven by lust for another. Although, it could be argued that it borders on obsession: I'll run around in circles til I run out of breath / I'll eat you all up / Or I'll just hug you to death. This song is just ridiculously infectious and simply elegant. Have a listen!

The Lovecats is far from my favourite song by the band but I've included it because it's a perfect example of trollery gone wrong. Robert, feeling a little disillusioned by the music business and his return to his childhood home, decided he wanted to create some Aristocats inspired-jazz / cocktail party swing to say fuck you to all those labelling them as a gothic band. Dosed up on LSD whilst writing it, the songs on Japanese Whispers were supposed to be a sort of hilarious liberation for the band. However, the trolling went a bit tits up when The Lovecats became the band's first Top 10 hit record in the UK and the song that everyone will probably reference when you ask them if they've heard of the band. Robert actually 'bought' the house in which the video was filmed. He told the estate agent he intended to buy it, got the keys and handed them back post-filming. My favourite bit of the video? Polka dot shirted Smith with a kitten, of course! Despite the funny stories surrounding it Lovecats has a sociopolitical message, musing on how vulnerable people cannot afford to dream and are let down by society to the point where they often feel like there is no return: Lets go and throw / All the songs we know / Into the sea / You and me / All these years and no one heard.


lullaby {disintegration - 1989}
Ah, Lullaby. With its nightmarish melodies and Smith's hushed lyrics, it is nothing short of a Gothic masterpiece. Unsurprisingly, it is their best performing single in the UK to date! Don't watch the video if you're particularly frightened of spiders and such, because you will shit yourself. Despite a fear of the eight legged creatures, the video for Lullaby, directed by one of their longstanding directors Tim Pope, is actually my favourite promo by the band. I'm pretty sure that it's going to happen to me one day if I don't stop spending so much time in bed! Smith has said that this song is about a number of things, but the lyrics sort of suggest that it is about drug abuse or at least a lack of control over the body and mind. The lyric don't struggle like that I will only love you more pretty much encapsulates what it is like to live with a condition or an addiction, I think. You should also check out the acoustic version.


lovesong [DISINTEGRATION - 1989}
Lovesong was actually Smith's wedding present to his wife, Mary, which probably explains why it is so sentimental. He was supposedly quite disappointed with how well this single performed because he felt like it was the weakest song on the album but, honestly, I think it was one of the best. It's the understated sister of Friday I'm In Love, in that it approaches love with a tender solemnity that is really quite moving and evocative despite its simplicity. The lyrics almost sound like undying vows: However far away / I will always love you / However long I stay / I will always love you / Whatever words I say / I will always love you. I just love how the band's records look at love so complexly, approaching it from different perspectives yet always doing so authentically.


fascination street {disintegration - 1989}
Disintegration is a fantastic record with some pretty superb tracks on it but I've gone for one of its punchier tracks, Fascination Street. Lets just take a minute to appreciate that delicious riff, shall we?! This was supposedly written whilst the band were anticipating a trip to Bourbon Street in New Orleans. This song is about what they expected to find or, as Smith put it, the 'incredulity that I could still be fooled into looking for a perfect moment'. The lyrics are sort of just like hey-just-forget-about-it-for-a-minute-and-dance: Oh it's opening time / Down on Fascination Street / So lets cut the conversation / And get out for a bit / Because I feel it all fading and paling / And I'm begging to drag you down with me / To kick the last nail in. I listen to this track whenever I'm just like fuck it. The Cure: purveyors of YOLO since 1989.


FRIDAY I'M IN LOVE {WISH - 1992}
Friday, I'm In Love is probably every non-Cure fan's favourite song by The Cure. You don't have to appreciate the band or their image or their sound to just adore this song because it is so infectiously joyful and upbeat. It's certainly no surprise that it's the band's 2nd best selling UK single to date. Smith actually thought he has stolen the chord progression because it was so catchy and he spent an age phoning people up to ask them whether they had heard it before. It's my bounce-around-the-room-because-I'm-just-so-freaking-happy song that Smith once said 'sugars the pill' of the darker songs that appear on their records. Smith has got a mischievous sense of humour and apparently the song's focus on Friday was a sarcastic nod to rock music's obsession with living for the weekend. The video, directed by Tim Pope, is another of my favourites by the band because there is nothing better than watching the band prance about like little excitable goth puppies! Although, they are not a goth band. Lets just clear that age old argument up, eh?!  Another one for the hypothetical wedding playlist, indeed!

There you have it! If you're a fellow fan of The Cure, let me know what your favourite songs are in the comments. If you aren't a fan, let me know what bands or songs mean a great deal to you and why. Thanks, again, for letting me share a band that means an incredible lot to me ♥