February was another great reading month for me! I think I made some really great reading choices and, on the whole, I really enjoyed what I read. I read some modern classics, some books I'd been meaning to get round to for ages, a play, some middle grade, some award winners...A nice eclectic bunch. If you'd like to keep up with my reading then you can do so in a number of ways. As you well know by now! You can do the following: follow me on Goodreads,  read my previous Mini Book Reviews or follow #beesreads and #bees52books on Instagram!

If you'd like to start a discussion in the comments then feel free to do so. Agree, disagree, recommend! I've split February's reviews into two posts because otherwise you'd have aged ten years by the end of it. Part two will be up very soon but, for now, enjoy part one! 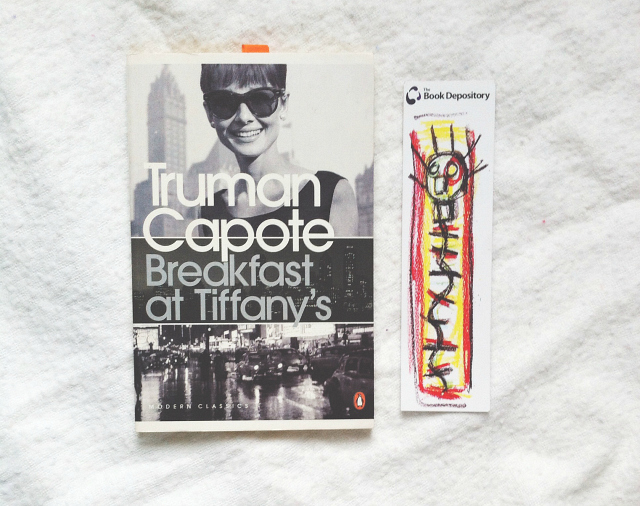 breakfast at tiffany's (and other stories) (1958)
DATE FINISHED: 06/02/14 | ISBN: 9781856132510 | PAGES: 157
It's New York in the 1940's, where the martinis flow from cocktail hour til breakfast at Tiffany's. Pursued by Mafia gangsters and playboy millionaires, Holly Golightly is a fragile eyeful of tawny hair and turned-up nose, a heart-breaker, a perplexer, a traveller and a tease.

+my edition also includes a few of capote's short stories: house of flowers, a diamond guitar and a christmas memory+
This was my first bit of Capote and it definitely won't be my last! I was hooked throughout, due to the complex characters and Capote's flawless writing style.  Capote's observational prose was absolutely stunning and, whilst it was comparable to other American novelists that I've read,  it felt so unique. Each of these stories hooked me in wholeheartedly to the point where it felt like nothing existed outside of the book. The characters, themselves, were also hugely interesting and made several observations that I have marked in order to return to at a later date.

I still don't know where I stand with some of them (Holly, in particular) but I quite like that, and I think their unreliability is kind of the point anyway. It was honestly quite refreshing to see just how self-destructive some of the characters were but I just wish that the characters didn't use terms that were so discriminatory. I guess that is symptomatic of the time it was written in but still...

Overall, I really enjoyed these stories. They were well worth reading and I'm definitely going to pick up some more Capote because I found his prose so endearing. I'd recommend this to readers of American literature, and those who love a bit of intricate description. 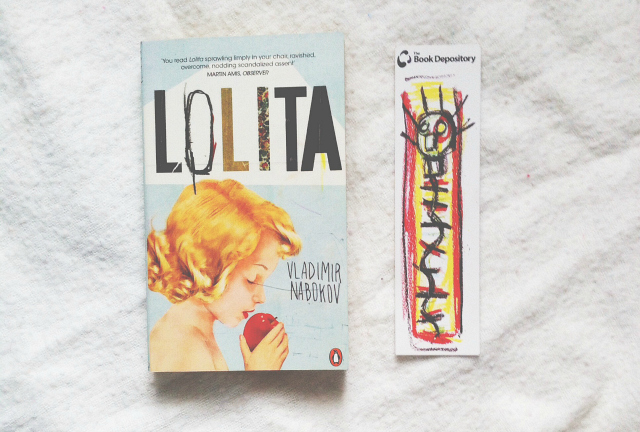 Humbert Humbert is a middle-aged, frustrated college professor. In love with his landlady's 12 year old daughter Lolita, he'll do anything to posses her. Unwilling to stop himself, he is prepared to commit any crime to get what he wants. Is he in love or insane? A silver-tongued poet or a pervert? A tortured soul or a monster? Or is he all of these?

Absolutely fascinating read that can't really be encapsulated in such a small review.

When I told people I was reading Lolita, I was met with mixed reactions. Some said they had to abandon it halfway through, others said that it was one of their favourite reads.  I certainly began the book with huge reservations and apprehension as to how Nabokov was going to let Humbert's obsession with Lolita play out. Thankfully, I needn't have worried.

Whilst Nabokov's poetic prose was undeniability seductive, this book was also incredibly haunting, and twisted, and conflicted and that's what made Lolita such an incredible read for me. It was dark. It was complex. It was unsettling. The prose was extremely rich in places but hugely palatable. Nabokov was one step ahead throughout, testing me with every page and for that reason I'm definitely going to be buying his other works.

This book is really difficult to review, so I'd just suggest you read it if you're interested in it at all. I'd recommend this book to readers of modern classics.  Lolita won't be for everyone, and it does come with a trigger warning, but I'll definitely be giving it a re-read. 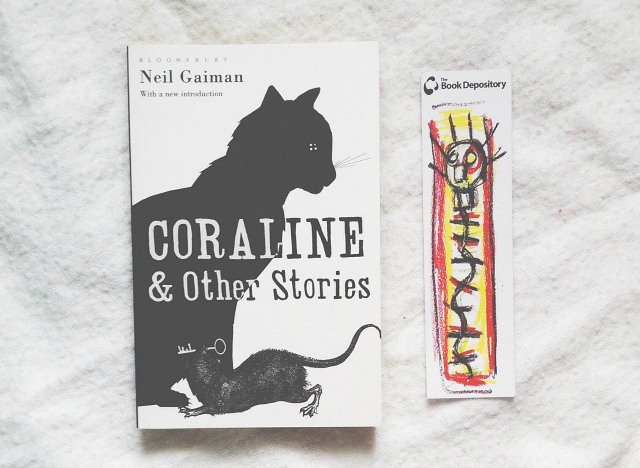 coraline (and other stories) by neil gaiman (2002/2007)
DATE FINISHED: 10/02/14 | ISBN: 1408803453 | PAGES: 278
When Coraline explores her new home, she steps...into another house just like her own - except...there's another mother and another father in this house and they want Coraline to stay with them and be their little girl. Coraline must use all of her wits...in order to save herself...Elsewhere in this collection,  a stray cat does nightly battle to protect his adopted family and a boy raised in a graveyard confronts the much troubled world of the living.

Coraline, like most of Gaiman's works, was a wonderfully dark and fantastical tale that I didn't want to leave.  Coraline is a pretty perfect protagonist, in my opinion. She was bold, attentive and determined, and I warmed to her from the off.  The plot was also deliciously creepy and addictive, and I think it's definitely something I'll re-read when I want a bit of escapism.

My edition also included an array of Gaiman's short stories. I'd read a few of them before in my copy of Smoke and Mirrors namely: Troll Bridge, Don't Ask Jack, Chivalry and The Price. However, the rest were new to me! I really enjoyed The Case of Four and Twenty Blackbirds - a clever mishmashing of fairytale figures, October in the Chair - an interesting take on storytelling and The Witch's Headstone - a short story that also happens to be chapter 4 of The Graveyard Book. The only story that I wasn't particularly interested in was How To Sell Ponti Bridge but, nevertheless, this book has been one of my favourite reads of the year so far.

I just love the way in which Gaiman approaches the fantastic, and makes it entirely accessible to all. These stories are creepy and fun in equal measure, and offer an addictive sense of escapism that's perfect for children and adults alike. I'm definitely going to pick up some more Gaiman. 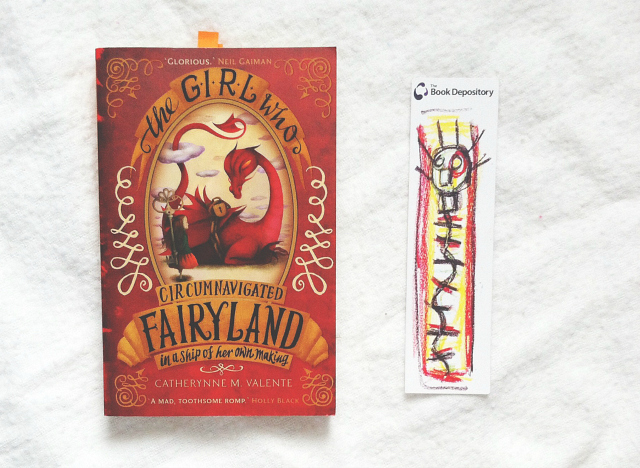 the girl who circumnavigated fairyland in a ship of her own making by catherynne m. valente (2011)

DATE FINISHED: 14/02/14 | ISBN: 178033981x | PAGES: 328
12 year old September lives in Omaha, and used to have an ordinary life...One day, September is met at her kitchen window by a Green Wind, who invites her on an adventure, implying that her help is needed in Fairyland. The new Marquess is unpredictable...and (if September doesn't) retrieve a talisman the Marquess wants...(she) will make life impossible for the inhabitants.

I'd heard so much about this book so I was pleasantly surprised when Luke gifted it to me for our anniversary. Before I get started, lets just take a minute to appreciate the title of this book and its glorious cover art...

I was expecting a fast-paced quirky adventure and, to some extent, I think this book delivered. I would describe it as an Alice in Wonderland, Peter Pan and Wizard of Oz hybrid. Some of the chapters also felt like they were lifted straight from a Studio Ghibli film, and I can definitely picture an animated film adaptation of this book sometime in the near future. However, there were times, particularly in the first half of the book, where I felt considerably meh towards the whole quirky adventure thing. It almost felt like it was struggling to identify itself, wanting to be delicate and twee one moment, and quite dense and judicial the next. Whilst this can be great, it can also be a bit annoying to read.

It definitely took a while to find its feet for me. However, once it found its feet about 200+ pages in, the story really picked up. Valente is obviously talented, and her inventions and character development were both promising. I definitely began to warm to some of the characters - Ell, in particular. The illustrations throughout were also a welcome addition. However, I really wish this book came with a mini glossary at the back or something so I could keep up with all of Valente's inventions. There were times where I felt a little disillusioned, and a glossary would've been a great resource to have at my disposal. I also didn't like the little summaries at the beginning of each chapter. Each chapter began with a little summary of the events that were about to unfold and it really narked me. SHOW ME, DON'T TELL ME!

Despite my negativity, I am determined to finish this series because the latter half was a lot more promising. I'm expecting quite a lot from the second book since Valente won't have to dedicate a lot of time to building her characters and her fictional world as she has already done so in great detail. She can just get straight into the action and, hopefully, straight into answering my questions! Overall, it was a good read and one that I would recommend to those in need of a little light hearted escapism, as well as those with an interest in middle grade fiction and/or fairytales. 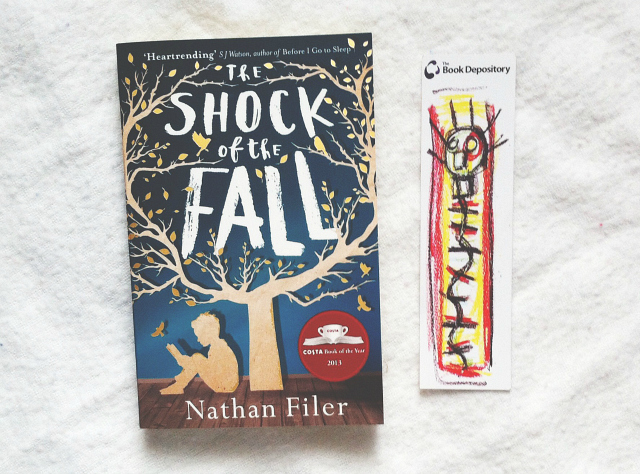 the shock of the fall by nathan filer (2013)
DATE FINISHED: 15/02/14 | ISBN: 9784971438 | PAGES: 310
'I'll tell you what happened because it will be a good way to introduce my brother. His name's Simon. I think you're going to like him. I really do. But in a couple of pages he'll be dead...And he never was the same after that'. The Shock Of The Fall is an extraordinary portrait of one man's descent into mental illness.

I heard about this book pretty soon after it was published but it took its recent Costa Book of the Year win to really inspire me to pick it up. I'm really glad that I chose to do so.

I'm always drawn to novels that look at mental health, grief and at the extremities of life and feeling. I often find that they have the most relateable and illuminating protagonists, and The Shock of the Fall was no exception. Matthew was a brilliant protagonist and Filer wrote his character and his grief, as well as the grief of the supporting characters, exceptionally well.

The Shock of the Fall is quite playful in its form. Filer interweaves letters and illustrations into his narrative, and plays around with fonts, chapter headings and space. I really enjoyed the movement and life and progression that this brought to the book, and the pacing was pretty much faultless as a result. This novel was dark and infectious but it also managed to inspire hope and laughter within me on numerous occasions. That's the sign of a good book and definitely the sign of a good writer, in my humble opinion.

I consumed this book within a few hours, and I've no doubt that other people will too. A ridiculously compelling read that has left me with a lot to think about, and that's why I have rated it so highly.

The vast majority of my book collection has been bought with my own money. Sorry, bank balance! However, sometimes I'm sent books to review. These books are marked with *. Handy, eh?! This page also contains affiliate links. If you buy the books through the links I've so lovingly provided, I'll earn a tiny commission to put towards books in the future. If you've used my link to buy books, thank you! You're a good egg.
Labels: 2014 books