We all love book recommendations, right?! I thought it'd be a clever idea to post monthly book reviews for you guys instead of being so sporadic about them. Neat, huh?! It's a pretty good way for me to take stock of my reading in 2014 and, hopefully, recommend some awesome books to you lovely lot. January was a really good reading month for me because I was full of new year enthusiasm! I read some classic children's literature, a translation, some YA and a few books I've been meaning to read for ages. If you want to keep up to date with my reads each month you can do so in a number of ways. You can  follow me on Goodreads or follow #beesreads and #bees52books on Instagram! Feel free to start a little discussion in the comments below. It'd be great to use these book posts as little bits of the internet where we can recommend reads for one another. I've had to split this month's reviews into two posts because there were too many! Part two will be up in a few days but, for now, here's part one! 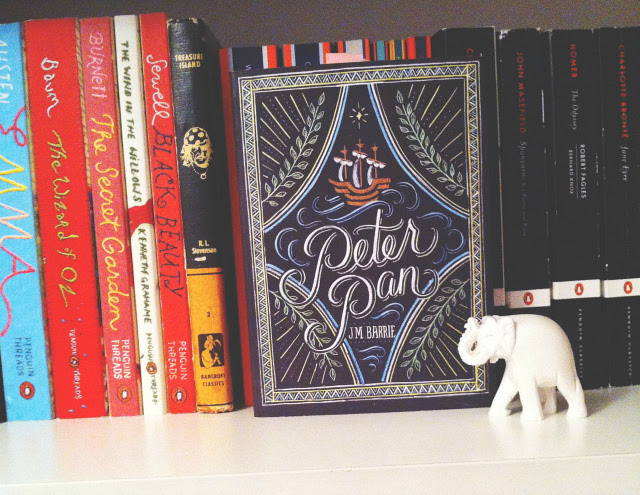 'One starry night, Peter Pan and Tinker Bell lead the three Darling children over the rooftops of London and away to Neverland...But a villainous-looking gang of pirates lurk in the docks, led by the terrifying Captain James Hook. Magic and excitement are in the air but...before long, someone will be walking the plank...'

I didn't read Peter Pan as a child, and I'm pretty glad that I didn't! I'm not easily disturbed, but this book made me feel quite uncomfortable on a number of occasions. I haven't watched the Disney adaptation of the book so I can't really make any comparisons, but I'm guessing the movie isn't as graphic?! I found Peter to be savage and heartless, full of hate and nothing at all like what I expected him to be. I didn't really find myself warming to any other characters either, as at times they were just as bad! The boys, in particular, were blood thirsty and driven by revenge, and Barrie peppered the story with graphic descriptions of torture and death. I know that carelessness and such may be the message but it's not something I enjoyed reading at all. The female characters were also a bit limp and uninspiring.

I can't say I appreciated the amount of intervention from the narrator, either. I much prefer to be left to watch the story unfold myself, and I felt like the story was stunted as a result of the narrator frequently popping up. I don't know whether I found this novel enjoyable because, at times, it really felt like a chore to read. However, I did enjoy the last few chapters a little more, but by then it was too late and it all felt a little too rushed. Peter Pan was not at all like the whimsical adventure that I was expecting but, then again, maybe I was being a little naive?! There were sections that I've marked that I found quite interesting, such as Mr Darling's reaction to his children leaving, but these moments were fleeting and I found the rest of it quite disturbing.

I don't think I'll read this again, at least not in its entirety. 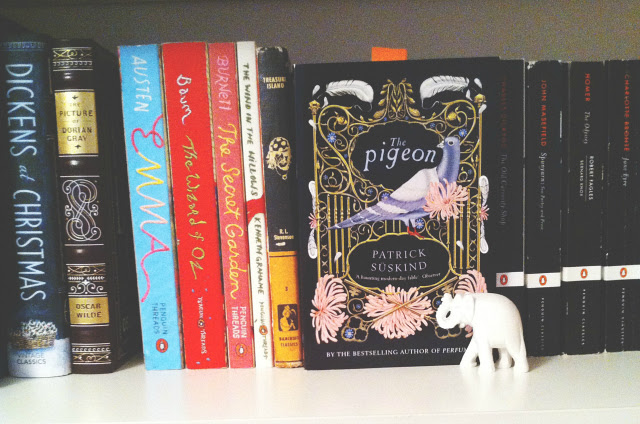 'The Pigeon tells the story of a day in the meticulously ordered life of a bank security guard, Jonathan Noel, who has been hiding from life since his wife left him for her Tunisian lover. When Jonathan opens his front door on a day he believes will be just like any other, he encounters not the desired empty hallway but an unwelcome, diabolical intruder...'

This novella was pretty beautiful. I was blown away by Suskind's ability to approach anxiety and vulnerability in a psychologically damaged protagonist, and do so in a way that was sensitive, and respectful, and honest. There are so many works that portray mental health issues as a funny quirk, so it was refreshing to read something dealing with these issues in a way that I, as someone who has had treatment for mental health problems, felt comfortable with.

Suskind blew my mind with the way in which he so eloquently explored the tormented mind. There were many moments in the story where I had to pause for reflection because he had managed to put into words how I have felt at times. He managed to perfectly depict anxiety attacks from beginning to end and I was literally going 'THAT'S IT! THAT'S EXACTLY HOW IT FEELS! WHY COULDN'T I SAY THAT?!'. He also doesn't leave a stone unturned. He puts you right next to Jonathan, and, at times, he even puts you in the place of his protagonist. I don't think this novella would hold so much value for someone that isn't aware of mental health problems, as the way I can relate to it probably enhances my reading, but even still I think the writing and the pacing is also something to be admired.

The Pigeon certainly won't be for everyone but, for me, it was a wholly cathartic experience, so much so that I didn't put it down. It was an affirming read that I felt inspired understanding, respect and hope, even in what may appear to be the bleakest and most fearful of times. Beautiful, fragile and honest. I'm looking forward to picking up Perfume! 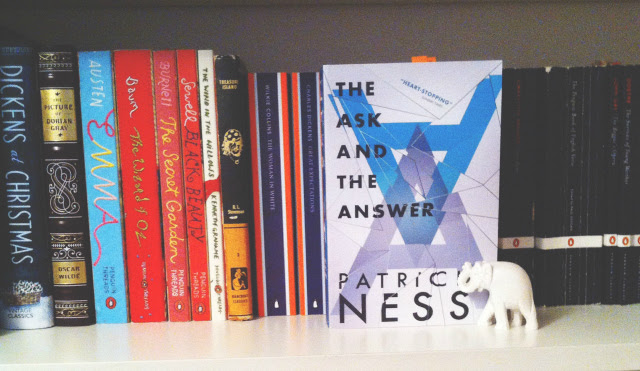 I don't want to post any spoilers so lets pretend there's a synopsis here, okay?!

I very rarely read series' but I bloody love this one! I'm having a bit of a love affair with Patrick Ness at the moment, I know. This is the second book in the Chaos Trilogy and I really enjoyed it. I don't think I can really say whether I preferred the second to the first because they are quite different, but I think I did miss the constant movement from the first book. This book sees Todd and Viola in deep shit, for want of a better description, and the pacing was bloody perfect, as ever.  Some of the moments in this book were really haunting as a result of Ness' perfect character development. This trilogy can do no wrong!

Admittedly, I'm apprehensive about the third book because I'm not sure where Ness will take it but I'm also very excited to find out. I'm definitely going to pick it up at some point this year!

Grating: 4/5. such a gripping series! 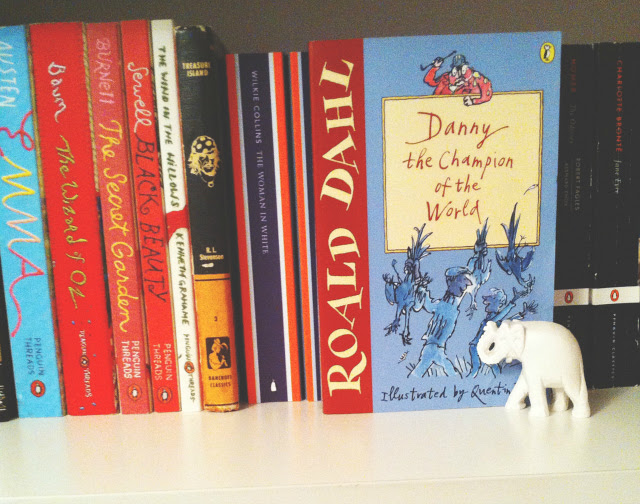 'Danny's dad had a secret, but now the secret is out and it's going to lead Danny on the adventure of a lifetime'

I have a little collection of Dahl books that I've been reading every now and again, and this month it was the turn of DANNY THE CHAMPION OF THE WORLD, a story that I must have overlooked as a child. This was quite a pleasant little read. I really warmed to the characters and enjoyed the relationship between Danny and his father.  The best thing about Dahl's books is, obviously, just how imaginative they are and as a reader that's something I really enjoy. I think this book could have been a bit shorter but, nevertheless, it was a nice light read in between heavier tales this month. 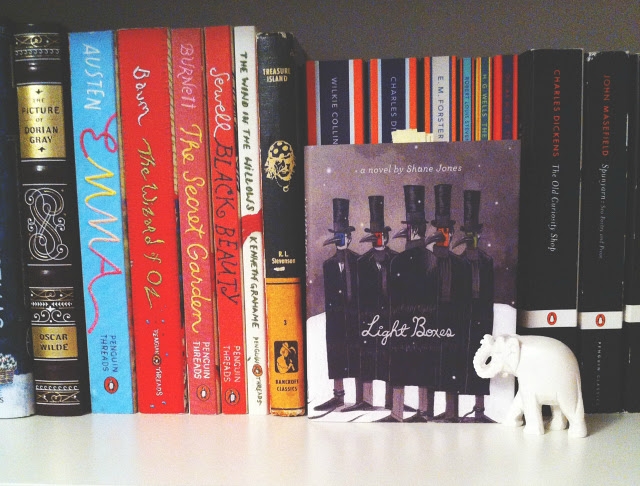 'After a god-like spirit punishes a town for flying by making it perpetually live out its days in the month of February, children go missing and adults fall into deep depression, but a small contingent of townsfolk fight back, waging war on February'

I hadn't heard anything about this novella until it popped up in my Amazon recommendations. Light Boxes doesn't take the form of your usual novella. The story is shared through a range of characters, sometimes through their personal lists, and Jones plays with space and size throughout. The unusual form combined with the poetic prose makes for a hipster's absolute dream! However, I really quite liked it.

This novella relies heavily on images, from the fantastical to the graphic, from the haunting to the uplifting. There were moments and images that I really enjoyed and thought were pretty beautiful,  and I think it'd lend itself well to a graphic novel / short film adaptation. There were times when I was a little dubious, I won't lie. At times, I felt that the female characters weren't 3d enough for me, and there were parts that I felt were a little cold. However, towards the end, the novella really picked up the pace for me.

I don't think this will be for everyone, especially if you don't like poetic prose or fantastical stories.  I like poetic prose but, I must admit, at times I felt Jones had been a little too heavy handed with it. However, that being said, I thought Jones experimented with some very endearing concepts, especially for a debut, and they were all executed relatively well. An interesting winter fable.

The vast majority of my book collection has been bought with my own money. Sorry, bank balance! However, sometimes I'm sent books to review. These books are marked with *. Handy, eh?! This page also contains affiliate links. If you buy the books through the links I've so lovingly provided, I'll earn a tiny commission to put towards books in the future. If you've used my link to buy books, thank you! You're a good egg.