Hello everyone! After posting Charles' pet tag post, I thought it was only fair that I devote a post to the ever beautiful, Woody.  Woody lives at Luke's parental home but he is a big part of our lives so I thought I would share him! If you follow me on Instagram or Twitter (vivatramp/@vivatramp), you have probably seen Woody grow up immensely in the short space of a year - remember the first time you saw Woody?! Once again, please leave your fan mail for Woody in the comments below. I can't promise that he will sit down and read them with poise and grace but I can promise that he'll run like crazy around the room before probably, albeit accidentally, nutting Luke in the balls. So, win win! 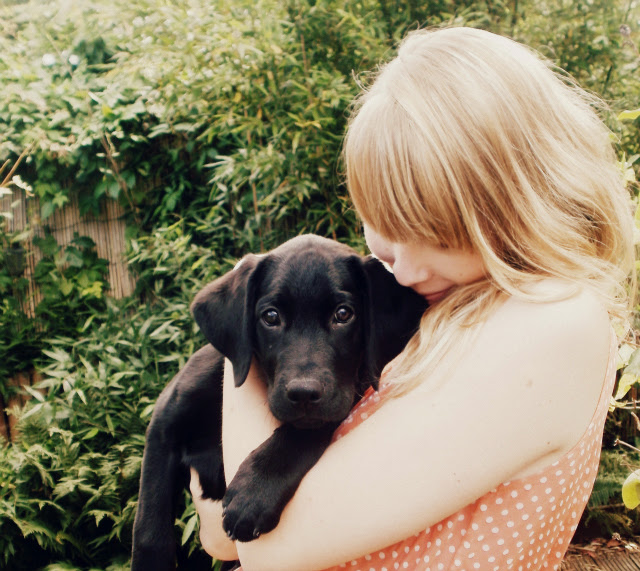 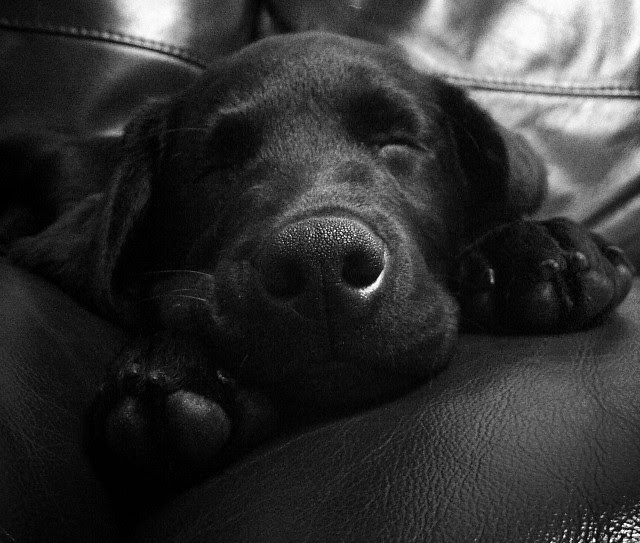 ♥  WHAT IS YOUR PET'S NAME?
His name is Woody! He's named that partly because of Woody from Toy Story, and partly because of his love for sticks. Luke's family compiled an extensive list of possible names before sticking with Woody. This list included: Wookie, Mo, Bolt, Lando, Max Payne (someone ring the RSPCA), Smokey and Zorro to name but a few. Woody's pretty bloody lucky to be named what he is really, isn't he?!
♥  DOES YOUR PET HAVE ANY NICKNAMES?
He's quite lucky because he does usually just tend to be called Woody. However, I do call him 'Woodybear' or 'Woodymouse'. He's also known as 'Woodster' or 'Little Boy'. More often than not, he's known as WOODY! because he seems to like getting up to mischief.


♥  WHAT KIND OF PET IS HE AND WHAT BREED?
Woody is a big black labrador with the most beautiful little brown eyes and the softest ears. He's also a dog, just in case that wasn't already clear enough...
♥  HOW OLD IS YOUR PET AND HOW LONG HAVE YOU HAD YOUR PET FRIEND?
Woody is a mere one and a bit years of age so he's super energetic, inquisitive and friendly.

Luke's family have had him since he was around 8-10 weeks old when he looked all fluffy and cute like this.... 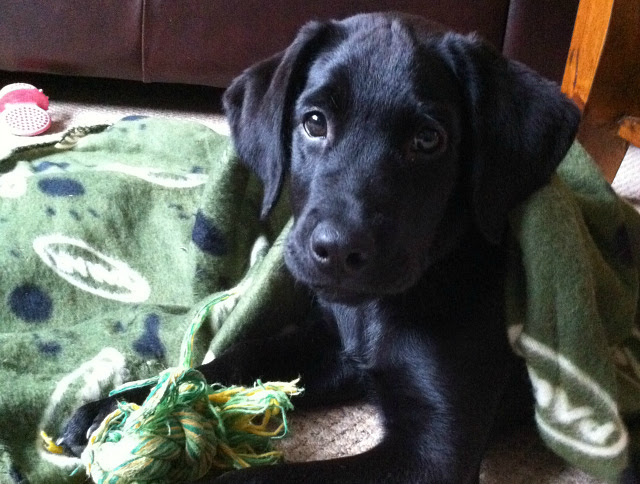 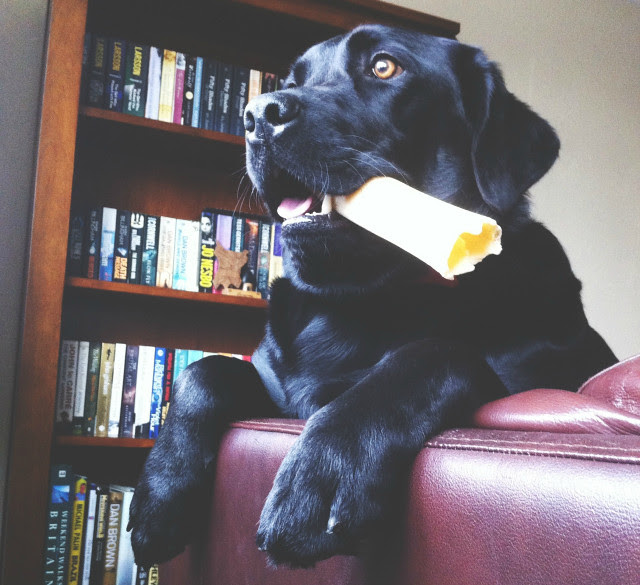 and now he looks like this - a 50's newspaper editor

♥  HOW DID YOU GET YOUR PET?
Luke's family got him from a little local family who had lots of labradors. A few of Woody's siblings got picked up as gun dogs but Woody was way too friendly to be considered, thankfully! Luke and his Dad went to pick him up and he sat patiently in the back curiously looking out the window at what was going on, albeit a little terrified at the whole prospect of being in a moving vehicle.

♥  WHAT ARE SOME QUIRKY THINGS ABOUT YOUR PET'S PERSONALITY?
He absolutely adores sticks, stealing underpants, socks, plastic bottles and bones with bits of toast hidden inside. Woody also loves being the centre of attention. If you even think about having a conservation with someone else he will weep until you involve him. Woody also likes to sit on top of the sofa like a little mountain goat if he hears anything outside or if he is waiting for anyone in particular. Despite his mischievous ways, he's also pretty willing to give you his paw, or roll over, in exchange for something to eat. He's also pretty fascinated by everything. He loves flinging grapes around the room and pat-a-caking them until they're squishy and he recently attempted to eat a marshmallow but I don't think that's something he'll be attempting again anytime soon. I think the best thing about his personality is just how loving and caring he is. Oh, and I also love the little look in his eye when he knows he's being naughty - this usually comes after he's stolen my shoes again.

♥  WHAT DOES YOUR RELATIONSHIP WITH YOUR PET MEAN TO YOU?
As I've pretty much said, Woody is Luke's best friend and somewhat like a third brother to him. It may sound silly but I can't imagine Luke without Woody. They talk to one another, judge one another, nap together, snack together, run the length of the house together! They're inseparable and are so incredibly similar, although thankfully Luke doesn't take outdoor dumps and sniff people's bums when he meets them....

♥  WHAT ARE SOME OF YOUR FAVOURITE PAST TIMES WITH YOUR PET AND WHAT ARE YOUR FAVOURITE MEMORIES?
This may sound extremely weird but I love Woody's soft little ears, so my favourite past time is stealing little kisses on his ears whilst he sleeps. I don't know why I've decided to share that. Some of Luke's favourite past times with the pup are the extensive walks they go on together, the little naps they take together post-walk and the extensive hours a day that they spend running the length of the house after one another. Luke's favourite memories include some of the earlier ones, like the first time he took him to the sea wall, the first time he attempted to drag a stick a few times the size of him back home and the first time that Woody realised that the washing basket was a dispenser of socks but, unfortunately, he could only carry so many. It's a cruel cruel world! 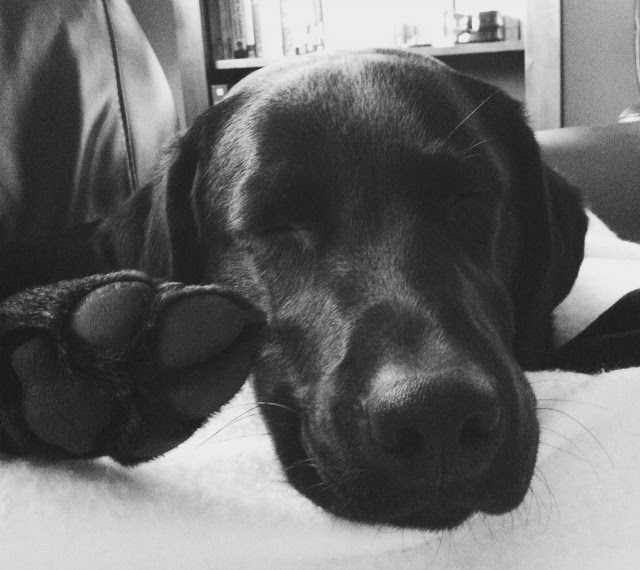 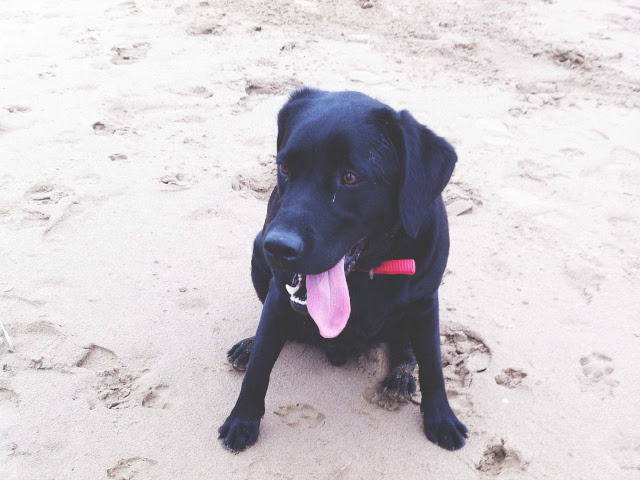 As you can tell, we are pretty head over heels where our pets are concerned! Feel free to let me know about your furry friends (minds out the gutter, please) and their little quirks in the comments below and I shall browse through them all to my hearts content. Why not check out my last pet tag post? I'm off to do a bit of planning. Lucky me!  ♥