If you follow me on Instagram or Twitter (vivatramp/@vivatramp), you will know that one of my best friends in the whole world is my cat. Oh yes, I'm one of those people. I thought it was about time that I introduced him to you properly through the medium of the pet tag and, lets face it, we could all do with some cute cat photos to scroll through on our lunch break, right?! I had to try and limit myself when it came to the photographs which was an absolute nightmare because they were all so cute! Please leave your fanmail in the comments below, I'm sure he would love to read the comments because he's a self-indulgent sort of guy with an eye for the ladies. 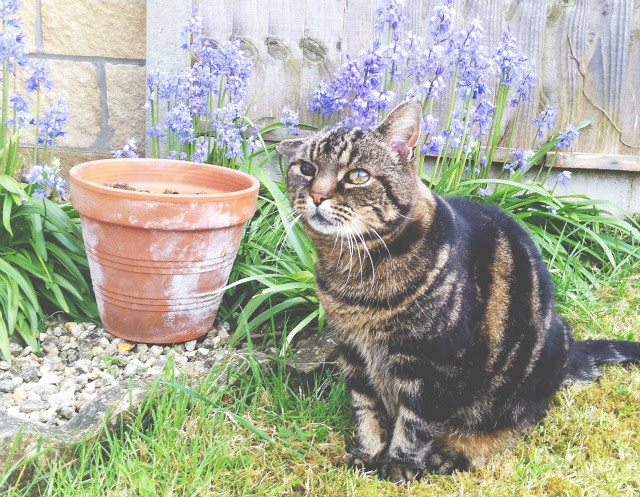 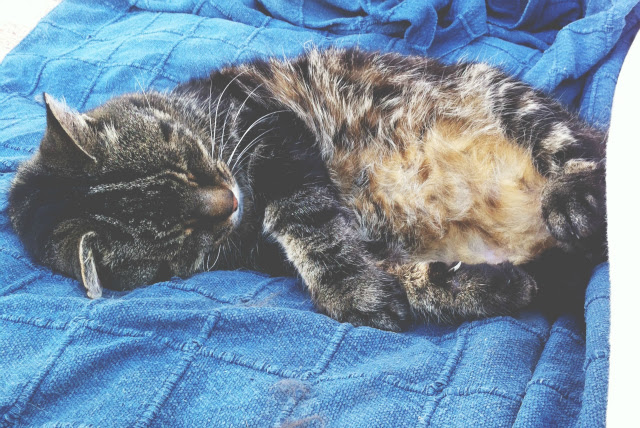 ♥  WHAT IS YOUR PET'S NAME?
His name is Charles - very regal. We didn't pick it but I genuinely can't imagine him being called anything else.


♥  DOES YOUR PET HAVE ANY NICKNAMES?
I say that I can't imagine him being called anything else but he actually has so many nicknames that it is borderline ridiculous.  I tend to call him Muffin, Little M, Muffinbottom, Muff, Mr Fluff, Little Possum and Little Mouse. Little Cub, my younger Sister, refers to him as Mr Fwuffy and Mr Fwuff. My Mamabear calls him Baby Boy, Littlest Cub, Mr C or CHARLES! (when he's in trouble).  It's safe to say that he probably has an identity crisis because he answers to pretty much all of them :/ Please tell me we aren't the only ones to give our pet ridiculous nicknames?!

♥  WHAT KIND OF PET IS HE AND WHAT BREED?
Charles is a parakeet big fat tabby tom cat with a little white beard and 'tache. He has a wonky ear because he had it stitched up as a little kitten following an illness.  Muffin has a chunk out of that ear too due to scraps when he was younger. He also has two different coloured eyes due to his age!

♥   HOW OLD IS YOUR PET AND HOW LONG HAVE YOU HAD YOUR PET FRIEND?
We actually don't know quite how old he actually is but we think he is about 17 at the moment! We are the sort of people that give their cat a birthday so make sure you save all your 'Happy Birthday' wishes up for October 12th because he'll be the big 1-8! I don't think he'll be celebrating with a boozy night out but I'm pretty sure he'll be off his furry tits on catnip by about 10am.

We've had Muffin for about 10 or so years now! Time flies. 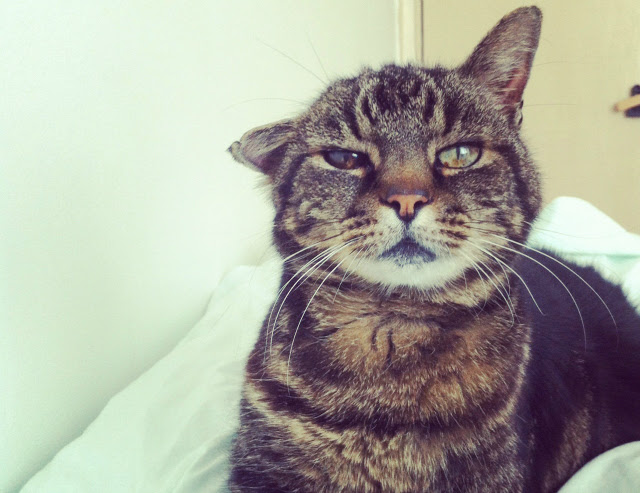 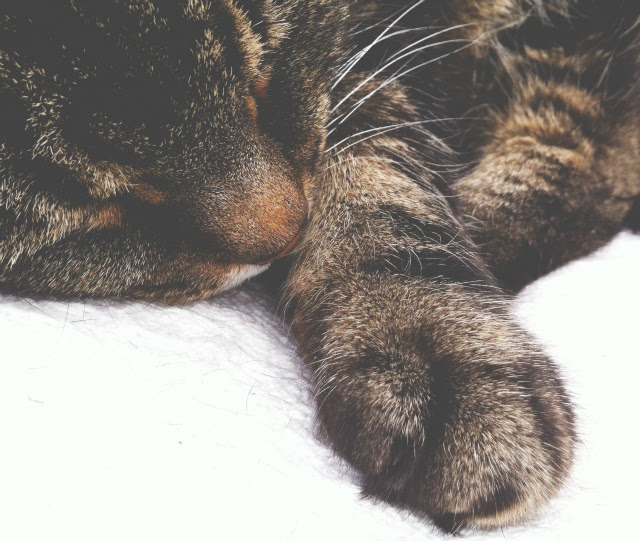 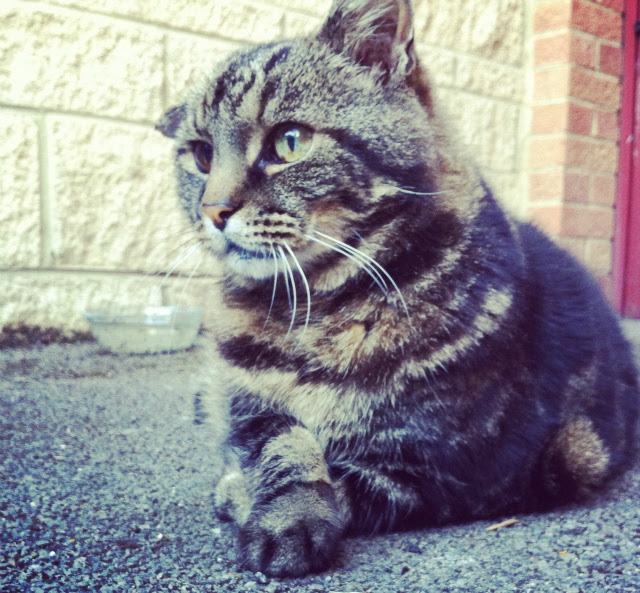 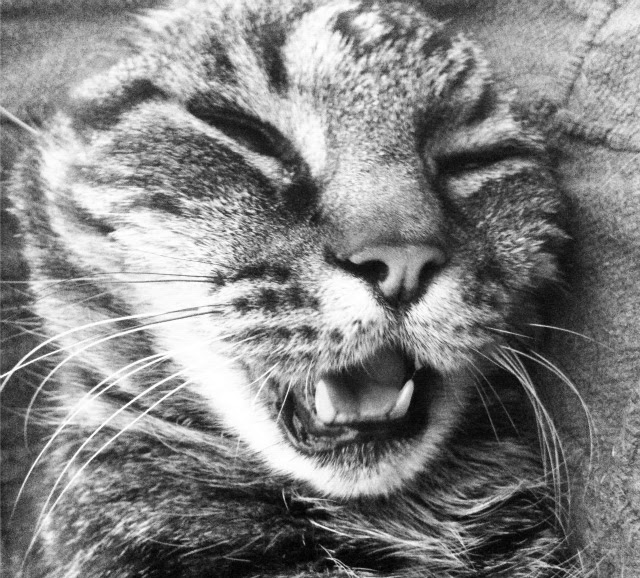 ♥  HOW DID YOU GET YOUR PET?
The funny thing is, we didn't actually set our sights on 'getting a pet' and my Mum is actually allergic to most cats! Charles was a neighbourhood cat from a couple of doors down that took a liking to our garden and to our little family. Prior to finding out more about him, we used to call him 'Mad Cat' because of his wonky ear. Over time, he would pop in a few times a day without fail and generally wouldn't leave us alone because his home had a scary dog named Stanley. One day, Charles' parents went on holiday and asked us to look after him/feed him. They never came back for him....After inquiring as to why, they asked us whether we would like to be his new family and the rest, as they say, is history!

We don't know much about his younger years but he was originally from the Cats Protection Society and he has really bad anxiety with regards to enclosed spaces, cars, water and bags. We have spent the past decade spoiling him rotten to make up for his early days. He's so very loved.

♥  WHAT ARE SOME QUIRKY THINGS ABOUT YOUR PET'S PERSONALITY?
He's a big soppy boy who loves looking after his three girls and loves attention when he's awake. However, he isn't much of a fan of males and spends most of his time giving them evils from afar. He also really doesn't like it when people laugh at him. Charles likes to sleep about 20 hours of the day, waking up to engage in light conservation and for food/wash/play breaks. He loves his food! He absolutely loves turkey, as well as cream, and he'll sprint to the kitchen if you say 'TUUUUUUUNA!' in the right way. Charles has a real knack for comforting you when you feel really low and he gives out kisses like no man's business when you bid him goodnight. Stellar gentleman.


♥  WHAT DOES YOUR RELATIONSHIP WITH YOUR PET MEAN TO YOU?
I'm pretty aware that this next bit will sound ridiculous but, honestly, I don't know what my family would do without the love that Charles gives us. When we are upset, he'll jump up on our laps and give us little headbutts to let us know that everything will be alright. When I first got out of hospital, Charles would spend everyday at my feet keeping an eye on me. When I'm away at uni, I have Skype sessions with him where he'll purr into the webcam and I'll usually sit and cry because it makes me want to get the next train home. He holds our family together. He makes us laugh every single day and I have no idea what we will do when he can no longer be part of our lives anymore. It sounds ridiculous but, bloody hell, I love him to pieces and cannot possibly express just how much he has done for us all individually over the years.  Bloody hell, I'm weird.


♥  WHAT ARE SOME OF YOUR FAVOURITE PAST TIMES WITH YOUR PET and what are your favourite memories?
Charles really really likes cupboards so every now and again I'll pick him up and let him look through all of the kitchen cupboards. I realise just how insane this sounds but, seriously, you have no idea just how excited he gets. I should probably introduce him to MTV Cribs; he would probably shit himself with excitement. We also like to take naps together on his sofa in the conservatory - told you he was spoilt. We like to play Hide 'n' Seek and Tig too but he cheats and runs into the furthest corner under the bed so that I can't catch him. We also like to sit in the big bay window and pull faces at the dogs as they go by. Recently, he has really got into the live kitten cams on Youtube. He finds them absolutely fascinating.

I have quite a lot of memories of Charles but I'll just leave you with two stupid things he has done recently because otherwise I'll be here all day. He recently tried to jump up on the dining room table to join Mama for breakfast (naughty) but he got his comeuppance when he jumped up onto an unsteady table mat, did a somersault in the air before landing on the floor. He wasn't very impressed, especially when we all fell about laughing at his misfortune. The other night he was sleeping on his pillow on the sofa, before deciding to roll over in his sleep. Unfortunately, he was right on the edge of the sofa so he rolled over into thin air. Fearing for his little life, he clawed himself to my Sister's leg to stop himself falling and their two faces, one of fear and one of pain, were an absolute picture. 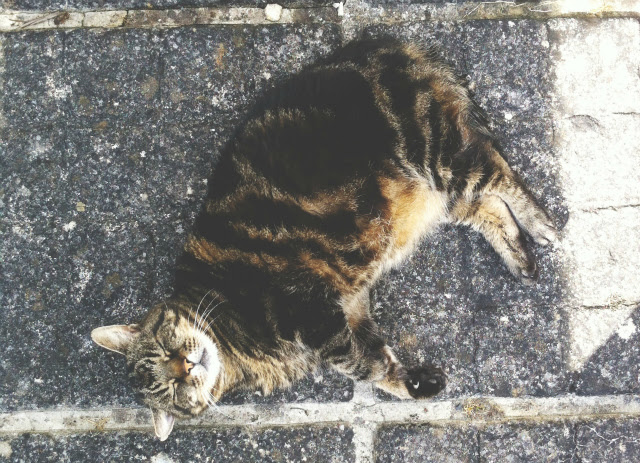 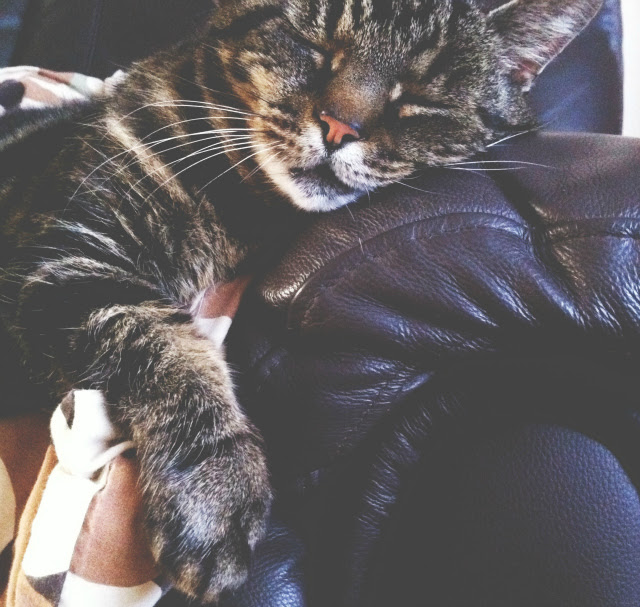 And that's that. He's something special, huh?! Let me know all about your furry friends and their little quirks in the comments below (cheeky!) and I'll have a little nose. I hope you aren't all too afraid of my cat lady tendencies and, if you are, you forgive me in time. Have an awesome rest of your day. I'm off to do a spot of organising. Joy! ♥