A little while ago, the people at Groupon got in touch and asked if I'd like £40 to put towards one of their offers and being a fan of a good deal, I said yes. Being the sort of person that I am, I waited around for a good local deal that involved eating lots and lots of food. As if by magic, The Dolphin House Brazzerie, in my university city of Plymouth,  were offering a six course tasting menu for two for £37! After waiting around for a good time to go, I made a booking over the phone with a friendly employee and Luke and I headed off to the Barbican in pursuit of good food.

The Brazzerie is tucked away in a part of the Barbican that we had yet to explore so it was nice to be able to stumble along, away from the busier areas of the harbour. As we entered, we were greeted by a lot of staff members. I'd probably advise that they have less staff hovering around at the start of the shift because it can be a little off putting when you walk in. We were shown to our table and offered various things that we could add to our meal, including a celebratory pint of Guinness or the accompanying wine list. In my opinion, we really didn't need two waiters to come to our table and wait on us but this wasn't an issue for too long because the restaurant soon began to fill up. Despite all this, the waiters were really friendly and well informed when it came to the dishes on the menu. I shall now do my best to take you through the courses and describe them. I'm not a pro, just yet, so bare with me ;) 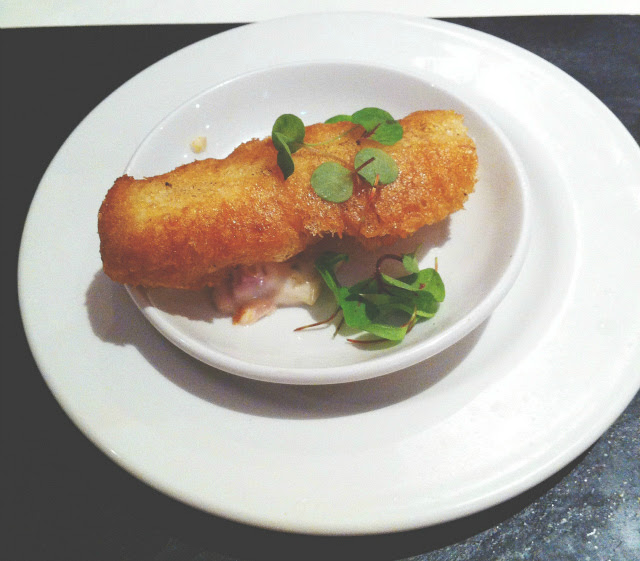 Smoked haddock goujon with homemade tartare sauce
This dish was a great way to start our meal. The goujon batter was light and crisp and the fish flaked apart at the touch of a fork. It was a very classic combination of flavours but it was beautifully done. The homemade tartare sauce was also lovely but I could have done without the addition of beetroot because I'm not a massive fan. However, overall, it was a great dish and we polished off every last mouthful! 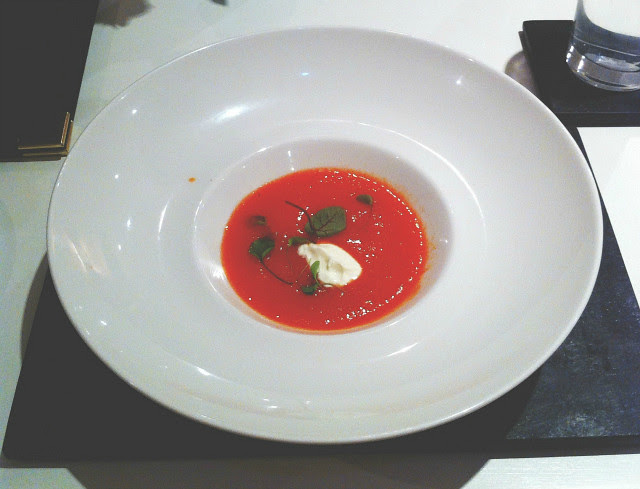 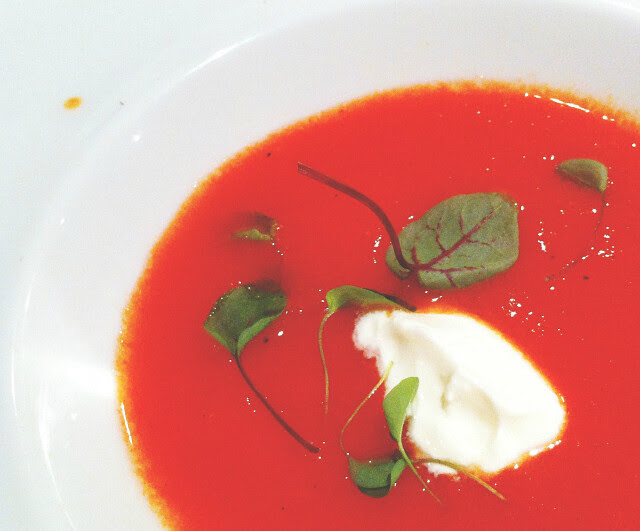 chilli and lime gazpacho
This gazpacho smelt absolutely incredible and the flavours were really fresh and perfect for welcoming in the spring. As you can see, it was also pretty visually enticing and the added dollop of sour cream was a very welcome accompaniment to the dish. However, it wasn't to my personal taste because it had way too much of a kick for me. I took a few sips, and was bowled over by the taste explosion but I had to leave the rest because of the heat. This doesn't discredit the fact that it was a really interesting dish though! 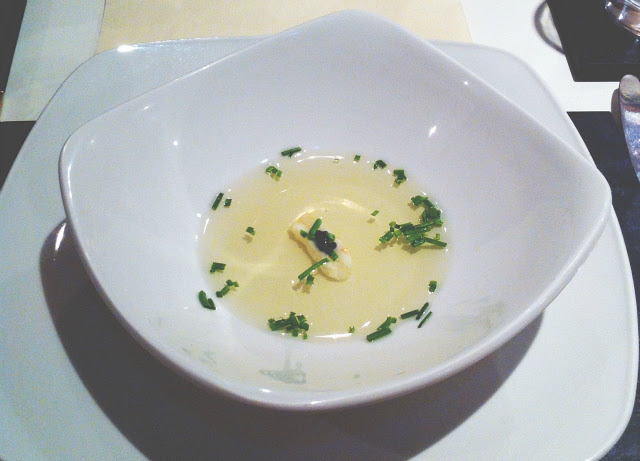 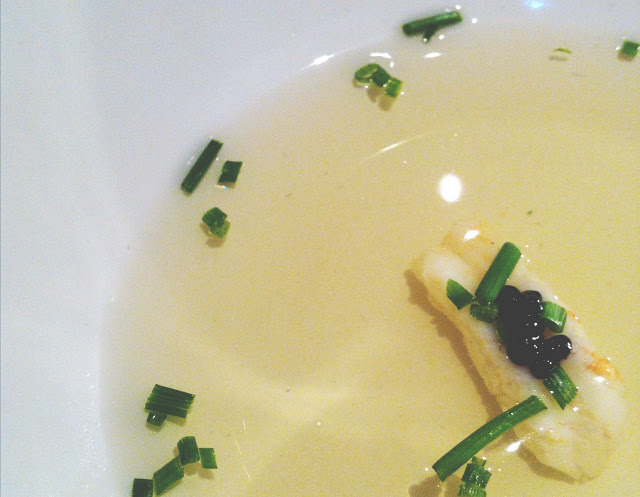 poached langoustine in a ham consummé with caviar and chives
I think this was the dish that we had the most qualms about. Whilst the poached langoustine was a nice idea, the consummé was far too salty to the point where facial expressions that I didn't even know my face could do were being pulled. I couldn't appreciate the flavours of the caviar, chives and langoustine due to the overwhelming saltiness of the broth and we both ended up leaving a lot of it because of this. It was a real shame. 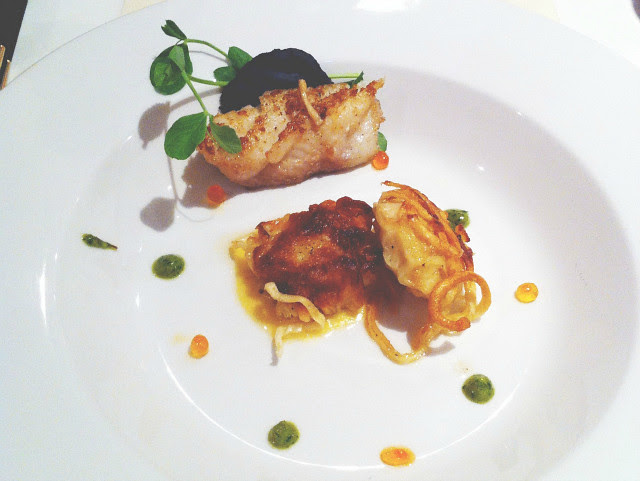 pan roasted jon dory, chorizo, scallops, keta caviar, pea shoots, squid ink tuile and angel hair pasta
We both agreed that this was the stand out dish of the entire meal for us. Firstly, look how pretty it is! The Jon Dory was perfectly cooked and just melted in the mouth. The dish, overall, was extremely fragrant and the salsa verde worked surprisingly well with the freshness of the fish. I also really liked the addition of the squid ink tuile and the angel hair pasta because it offered an interesting balance of textures. Overall, the dish was extremely fresh and, in my opinion, would be a perfect spring supper to serve to guests! 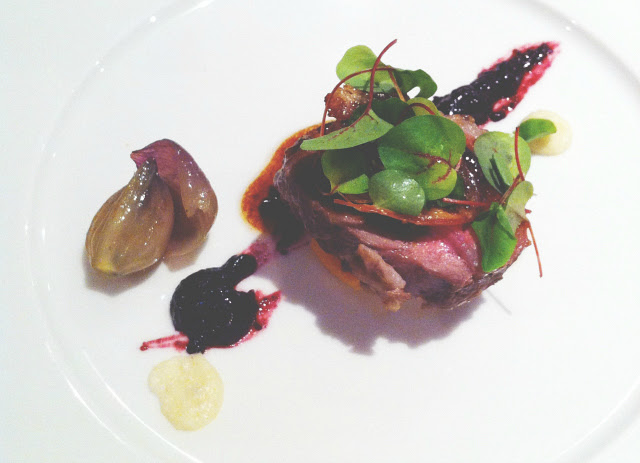 Again, look how pretty this dish is! I had never tried smoked lamb before but I was won over by the perfectly cooked meat and the smokey flavour which worked ridiculously well with the blueberry compote. I also loved the crispy shoulder for added texture. I was a bit dubious about the bone marrow sauce but it actually came to be one of my favourite things about this dish - perfectly dark and rich. We both agreed that we would've loved more of the cauliflower pureé instead of the onion which felt a little out of place. We both also would've loved this dish to have been served on a hotter plate because the meat cooled pretty quickly. The only thing that really bothered me about this dish was the odd circular potato on the bottom - it didn't resemble a galette, like the menu promised, and it tasted more like a soggy potato smiley. They should serve this dish with some form of roast/sauteed potato instead because I can imagine that would work well. Despite these little issues, we both loved this dish and its interesting mix of flavours. 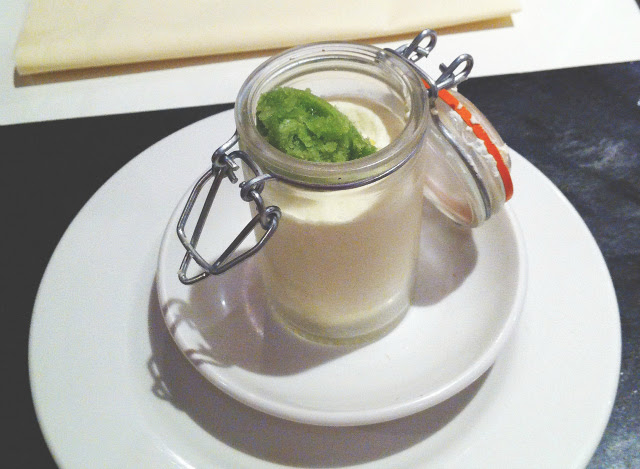 lemon mousse with a basil sorbet
I adored the way that they served this dish and I have now decided that every time I serve a pudding (read: never) I'm going to serve it in little jars such as this! With my Crohns disease, lemon is usually a completely no go food. However, this mousse was fluffy and light and the lemon certainly didn't overpower the dish. We were both dubious about the combination of lemon and basil together but it was simply stunning. It worked as a great palette cleanser and I could easily eat another right this second. 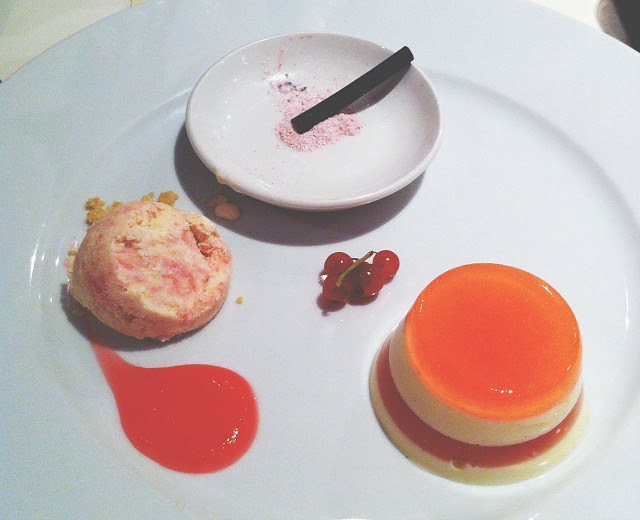 vanilla and rhubarb panna cotta with rhubarb gel, rhubarb ripple ice cream and sherbert
Firstly, I really don't like rhubarb but this plate of dessert got demolished! The presentation, again, was really interesting. The panna cotta deserves its own round of applause for looking so bloody good, don't you think?! The sherbert was a fun little novelty and I had great fun trying to eat up every last bit of it. The ice cream and the rhubarb gel were a perfect combination   and I would've loved a few more biscuity crumbs on my plate to give some crunch to an otherwise soft plate of food.

Overall, we loved the experience of the tasting menu and, in our opinion, it was great value for money. The Groupon deal offered us an incentive to try out restaurants in the local area and it also gave us an opportunity to try food that we hadn't eaten before / don't cook on a average day. We'd definitely go back to The Dolphin House to try another of their tasting courses and would love to take some family members along to share in the experience. We are definitely going to make more of an effort to scour Groupon for more deals with our local eateries, particularly when they're this good value! It gave us something to look forward to and also allowed us to take a couple of hours out of our hectic schedules to just enjoy one another's company. Swoon!

Can you recommend any restaurants in the Somerset/Devon area?

▴
If you'd like to scroll through all of my adventures then you can do so.


*As expressed, I was given a £40 voucher to put towards a Groupon deal. However, all opinions are mine and Luke's because, contrary to popular belief, you can't buy us with food....